The 1972 disaster hit The Poseidon Adventure was ripe for a big-budget CGI remake, and who better to helm it than thriller expert Wolfgang Petersen, director of Das Boot and The Perfect Storm? It hardly matters that a TV movie remake (also based on Paul Gallico’s original 1969 source novel) was made less than a year before, because Petersen’s version is far more spectacular, with shocking digital effects, massive sets, amazing stunt-work and enough fire and water to fill five movies with challenging worst-case scenarios. Once again, the plot concerns the capsizing (by a massive “rogue wave”) of a state-of-the-art luxury liner, and the struggle of a small group of survivors (including Josh Lucas, Kurt Russell, Emmy Rossum, and Richard Dreyfuss) to climb upwards, to the ship’s hull, in their treacherous quest for a safe exit. Unfortunately, most of these characters are two-dimensional and under-developed (especially when compared to the 1972 film’s all-star cast), and the unimaginative screenplay by Mark Protosevich (reportedly worked on by several uncredited writers) subjects them to a rote series of obstacles that grow increasingly routine and repetitious, not to mention contrived and illogical. Again, it hardly matters, because Petersen’s handling of non-stop action is so slick and professional that Poseidon gets by on sheer adrenaline. The capsizing scenes are nothing less than awesome, with some effects so real (and so horrifying) that younger and more sensitive viewers may need to look away. And while it lacks the engaging humanity of the 1972 version, Poseidon  is certainly never boring. Faint praise, perhaps, but you’ll get your popcorn’s worth of mindless entertainment. 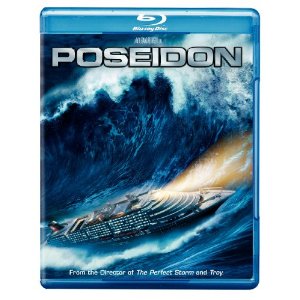 It all started with Paul Gallico’s novel, “The Poseidon Adventure,” which I found fascinating due to the way it presented a fairy tale disguised as a modern survival story. I say this mostly because of character development; each person was assigned a given personality that never faltered and often times created great conflict as they made their way through the bowels of the capsized S.S. Poseidon, a luxurious but aging ocean liner. Despite most being unwilling to band together, they were still drawn to the leadership of an obsessively driven reverend, and in an almost supernatural way, they continued on their journey.

Then came Irwin Allen’s 1972 film adaptation, something that focused more on the action than on the humanity of the situation. I have to admit that I’m not a big fan of this version; I guess I was too bogged down by the original novel and the way it banded a group of one-tracked characters together. It did succeed in providing some good visual material (even though the special effects are cheesy looking by today’s standards), and it gave audiences a lot of familiar faces to root for (Gene Hackman, Ernest Borgnine, Shelly Winters, Red Buttons, and Jack Albertson just to name a few). But on the whole it felt flat, emotionless, and shallow.

Now we have Wolfgang Petersen’s remake, simply entitled “Poseidon.” Petersen–perfectly capable of handling nautical tragedies (“The Perfect Storm”)–has crafted a much more entertaining adaptation despite the fact that character development is seriously lacking (meaning that it bears little if any resemblance to Gallico’s novel, other than the capsized ship). There’s really no need to describe the basic plot; anyone who’s read the book or seen the original film will know what to expect. And even if they haven’t done either, the trailer for this new version pretty much says it all: on New Year’s Eve, a freak title wave hits the ship and flips it over, leaving precious little time for a handful of survivors to work their way to the keel and escape.

The aspects of the story created just for this version focus only on special effects and character names. Gone are the Reverend Frank Scott, Mike and Linda Rogo, Manny and Belle Rosen, Susan and Robin Shelby, and James Martin. Instead, we have: Dylan Johns (Josh Lucas), a former navy officer; Robert Ramsey (Kurt Russell), a retired firefighter and former Mayor of New York; his daughter, Jennifer (Emmy Rossum), secretly engaged to the love of her life, Christian (Mike Vogel); Richard Nelson (Richard Dreyfus), an architect reeling over the breakup with his boyfriend; Maggie James (Jacinda Barrett) and her son, Conor (Jimmy Bennett); and Elena Gonzales (Mia Maestro), a stowaway desperate to reach New York and visit her hospitalized brother.

In terms of the special effects, I think it’s obvious that the model-ship-in-a-tub quality shots of the original film don’t hold a candle to the work put into this remake. The destruction scenes are absolutely amazing, and for that we can thank computer generated imagery. The overall design of the Poseidon itself is striking, looking more like a streamlined, modern luxury liner than a cheap imitation of the Queen Mary. It’s the kind of look that lends itself better to the moments of action, which are numerous to say the least; certain sections of the ship can’t seem to stop flooding, and there are enough explosions to keep thrill junkies on the edge of their seats. It takes the action to a level the original film didn’t dare explore by making it fast paced and adrenaline pumping.
Movie Content: 8/10

The print is presented in 1080p/VC-1 with a 2.41:1 aspect ratio. ‘Poseidon’ was originally released in high definition on HD DVD in 2006. The print looked absolutely stunning on HD DVD and the trend continues with the Blu-ray version of the film. I found the colors to pop off of the screen and very vibrant. These vibrant colors also help with the details in the film, as you see some of the most detailed aspects of the film come alive. Black colors are very strong and bold during the darker scenes with no loss of detail.
Video Quality: 9/10

The audio is presented in DTS-HD MA lossless 5.1 mix. he action sequences take advantage of the soundfield. From the craziness on the boat, all the way through all the action sequences I felt very engaged by the soundfield as it was at work at all times. The sound effects from the rear speakers were quite impressive. Dialogue comes through the center channel very clear.
Audio Quality: 9/10

Overall, the movie is slightly anticlimactic, and somewhat unreal (who knew there was so much material on board of a ship that was incendiary), but it’s a very good thrill ride nonetheless. The ending is what the viewer wants, and it’s a worthwhile movie that had several exciting scenes, some stunning CGI, and enough action to enthrall.
Overall Rating: 8/10