Posted in DVD Reviews by George Theofanopoulos on 15 September 2009 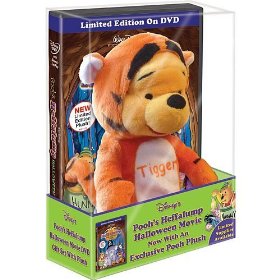 It’s a hilarious haunted Halloween in the Hundred Acre Wood. Roo’s new best pal, Lumpy, is excited to trick or treat for the first time…until Tigger warns them about the dreaded Gobloon who’ll turn you into a Jaggedy Lantern if he catches you. But if they catch the Gobloon before it catches them, they get to make a wish! With Roo by his side, Lumpy knows he can face anything. So when Pooh eats all the Halloween candy, Lumpy and Roo decide to be “brave together, brave forever” and catch the Gobloon so they can wish for more. When the two friends become separated, however, Roo decides to wish for something even more important. Filled with adventure, unconditional friendship and lots of laughter, Pooh’s Heffalump Halloween Movie is a sweet treat for the whole family.

It would certainly seem that they’re up to some of their old tricks by editing the contents of “Boo to You Too, Winnie the Pooh” into the movie as a story told by Roo to Lumpy to help him feel brave. However, it really isn’t too bad and I had never seen it before. It also has Gopher in it, who you don’t usually see anymore.

Overall, I’d say that it’s more of a treat than a trick. The movie starts out with Roo and Lumpy joining up for Lumpy’s first Halloween and trick-or-treating experience. They head over to Piglet’s house, where Rabbit is being his usual self — trying to meticulously plan the whole thing out and being a bit of a pain in the process. (Fortunately, this segment is mercifully short.) They try to get Lumpy psyched for Halloween, but end up scaring the poor little heffalump so much that he ends up hiding under the bed.

I do think that this has some important ideas on friendship and is generally a good film. The vocal performances for the songs aren’t really quite as up to snuff as the original “Heffalump Movie,” although the instrumental score is great! If you and/or your kids liked the original “Pooh’s Heffalump Movie,” I’d say to at least give this a shot. I’d wager it’s odds-on you’ll either really like it or really hate it (like some here) or just overall consider it maybe just slightly above-average like me.
Movie Quality: 8/10

If you enjoyed the first Heffalump movie then you will enjoy this one. The movie is about Lumpy’s first Halloween and back tracks to other Pooh Halloween movies during the movie. It’s a nice Halloween movie that teaches kids not to be afraid of Halloween while introducing why kids love the holiday so much while teaching how important friendship is.
Overall Rating: 8/10