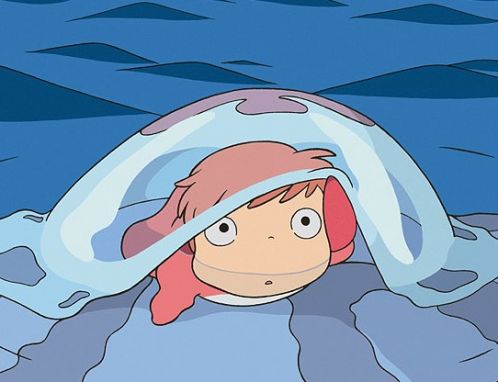 Welcome to a world where anything is possible! Academy Award® winning director Hayao Miyazaki (2002, Best Animated Feature, Spirited Away) and legendary filmmaker John Lasseter together with Disney bring to life a heartwarming and imaginative telling of Hans Christian Andersen s classic fairy tale The Little Mermaid. A young boy named Sosuke rescues a goldfish named Ponyo, and they embark on a fantastic journey of friendship and discovery before Ponyo s father, a powerful sorcerer, forces her to return to her home in the sea. But Ponyo s desire to be human upsets the delicate balance of nature and triggers a gigantic storm. Only Ponyo s mother, a beautiful sea goddess, can restore nature s balance and make Ponyo s dreams come true. Ponyo will delight your family with its magnificent animation and timeless story. 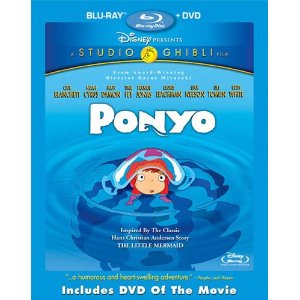 The story is an amalgamation of certain  fairy  tales  with a touch of “An Inconvenient Truth.” It’s straightforward: boy meets girl fish, girl fish loves boy, girl fish wants to be human like boy, girl fish becomes human, then the ocean ecosystem is disrupted, causing damage beyond geological proportions due to the actions of girl fish. A simple tale, indeed. Usually, the premise screams out thrills, suspense, and a compelling adventure, but color me surprised because the movie doesn’t have any; it has the adventure part, but it wasn’t all that exciting which sadly reinforces my initial impressions.

Although I try my best to suspend disbelief, I did unsuspend when the human characters aren’t so bothered by the unusual chain of events. Sosuke, the male lead, I can believe due to his youth and innocence, but his mother seems all too humble about the sight of a goldfish. The rest of villagers acted the same way (not just for the fish), in fact, the only character I can identify with is the cranky old lady because even she notices something is wrong with this whole thing.

Ponyo herself is an intriguing character, though. Although the US trailers did their very poorest to hide her human form (the trailers for “The Last Unicorn” and even “Shrek II” kept that surprise hidden), when she became one, she possesses magic that does unusual things: she can make things five times its size, she can cure the sick by rubbing her face on their faces, not to mention she can control the ocean if she likes. She’s a flipping miracle worker, a divine creature whom I am totally not comparing to certain religious figures. Conversely, her mother, The Goddess of the Sea, provides no significant purpose for the whole film. She was mentioned as a serious threat, but all she did was play a beautiful spectator. Another thing, if she’s the Goddess of the Sea, why didn’t she stop that tsunami her daughter is causing? What, was she wasting time at home watching Grey’s Anatomy or the show’s equivalent in Japan?

I’m aware this isn’t the type of Ghibli film that would tug my heartstrings with the characters’ obstacles for them to walk the path of self-worth. This is a lighter film, something for everyone who’s afraid of a little danger. There were previous Ghibli films that were also light in tone, but this film neither has the obstruction of “Kiki’s Delivery Service” nor the wonder of “My Neighbor Totoro.” There was a lot of magic, but not a lot of mystery; the movie constantly shows off on its vibrant displays that there’s no subtlety.
Movie Content: 8/10

The print is presented in 1080p/AVC MPEG-4 with a 1.85:1 aspect ratio. ‘Ponyo’ is amazing to look at; the use of watercolors is simply exquisite, so kids are going to like what they see. This is a very colorful film that is vibrant and pops. With a strong color palette, it brings out the fine details. Black colors are deep looking. Taking all these strong elements, they produce one sharp looking picture.
Video Quality: 9/10

The audio is presented in DTS-HD MA lossless 5.1 mix. This mix takes advantage of the soundfield in this film. The soundtrack and sound effects can be heard coming from all around as this is one dynamic audio experience. At times animations tend to be more dialogue driven with lack of atmosphere. Dialogue is clean and center with no balance issues.
Audio Quality: 8.5/5

On the whole, ‘Ponyo’ is a good film; a fine piece of animated work which is perfect for youngsters and family audiences. Due to the loss of momentum toward the end, though, it falls far short of classic status. Since Miyazaki at his least is still better than a majority of other animated films.
Overall Rating: 8/10