As sequels go, Poltergeist II has the advantage of retaining most of the original film’s cast (although the absence of the actress Dominique Dunne, a murder victim, is not explained). It’s still not enough to turn this dreary outing into a passable horror movie. The terrorized Freeling family has moved from their haunted house, but the bothersome ghosties are not finished with them yet. The lame scares include a sequence built around Craig T. Nelson swallowing a demon worm from a tequila bottle and then regurgitating it. Far more frightening is the wizened face of theater legend Julian Beck, who appears as a foreboding old guy with bad news for the Freelings: “Yer all gonna die!” MGM/Fox presents POLGERGEIST II: THE OTHER SIDE in 1080p hi-definition for the first time! 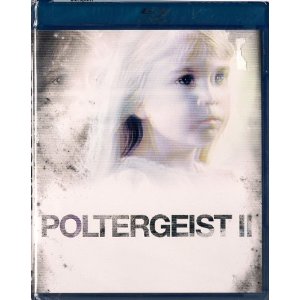 By any stretch of the imagination, ‘Poltergeist’, released in the summer of 1982, was one of the few horror films released in the Eighties that had any business being referred to as a masterpiece of its genre. Putting a typical middle-class California family into a situation of supernatural horrors, ‘Poltergeist’ scared up a ton of business. So it’s not too surprising that it should have spawned a sequel, given that it had such an ambiguous ending. But ‘Poltergeist II’, despite retaining a good deal of the original movie’s best elements, is one of what I like to call Frustrating Horror Sequels–films that you hope are going to succeed on their own merits, but instead end up not only falling short on that count but standing in the shadows of their predecessors in the bargain.

Once again, Craig T. Nelson, JoBeth Williams, Oliver Robins, and Heather O’Rourke (Dominique Dunne, who played the oldest daughter, was strangled to death not long after the release of the first movie) are the main attractions. They believe they’ve left their ghostly past in Cuesta Verde behind them, but that turns out not to be the case by a long shot. Their former residence had apparently been built over a massive Indian graveyard, so the ghosts that will haunt them now, and once more go after their daughter (O’Rourke), are of the Native American kind, including the ominous Reverend Kane (Julian Beck, a fairly chilling performance). But they too have their savior in Tangina (Zelda Rubinstein), and a second savior in the guise of a wise Indian mystic (Will Sampson, from ONE FLEW OVER THE CUCKOO’S NEST). They all go back to Cuesta Verde to confront Kane and his ghostly minions.

As mentioned before, what makes ‘Poltergeist II’ work as well as it does are the performances by the four leads. They make for the most sympathetic family unit possible. Rubinstein’s return is most welcome, and Sampson’s presence is extremely admirable. So too are the superb special effects by Richard Edlund (though the make-up effects are a bit more gruesome this time around, mandating a ‘PG-13’ rating) and Jerry Goldsmith’s score.
Movie Quality: 8/10

The print is presented in 1080p/AVC MPEG-4 with a 1:85:1 aspect ratio. Colors are strong throughout looking great which I did not expect. Black levels are not that great which this print would have benefited from greatly. Clarity is decent with details being a huge improvement over the DVD release. There is some grain which is consistent. The one issue with this release is the dirt and white specs that are present. I will give props for a well done transfer which I didn’t expect.
Print Quality: 7/10

The audio is presented in a DTS-HD Master Audio 5.1 mix. This is not an audio mix that you will go in expecting huge things from the soundfield as it is primarily a dialogue driven film. The dialogue is clean and clear through the center channel with no apparent issues. I was rather happy with the way the film sounded considering that this was more of a dialogue centric film.
Print Quality: 7/10

This was one hell of a sequel to the original film. Just so you know, Dominque Dunne, who played DANA FREELING in the first film did not appear in this film, for the actress was murdered by her boyfriend, a year after the first film was released. Julian Beck, who played KANE in this film had died of cancer, shortly after this film was completed. It was his dying wish to grab one more acting role just before he died.
Overall Rating: 6/10