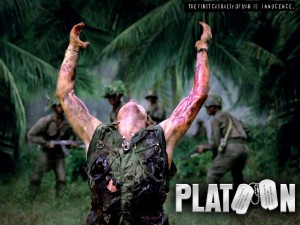 Platoon put writer-turned-director Oliver Stone on the Hollywood map; it is still his most acclaimed and effective film, probably because it is based on Stone’s firsthand experience as an American soldier in Vietnam. Chris (Charlie Sheen) is an infantryman whose loyalty is tested by two superior officers: Sergeant Elias (Willem Dafoe), a former hippie humanist who really cares about his men (this was a few years before he played Jesus in Martin Scorsese’s The Last Temptation of Christ), and Sergeant Barnes (Tom Berenger), a moody, macho soldier who may have gone over to the dark side. The personalities of the two sergeants correspond to their combat drugs of choice–pot for Elias and booze for Barnes. Stone has become known for his sledgehammer visual style, but in this film it seems perfectly appropriate. His violent and disorienting images have a terrifying immediacy, a you-are-there quality that gives you a sense of how things may have felt to an infantryman in the jungles of Vietnam. Platoon won Oscars for best picture and director. 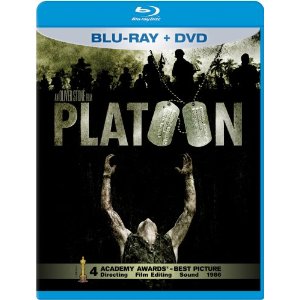 Oliver Stone’s Platoon transcends the romanticization that so often infuses our thinking about war with a painfully honest portrayal of its dehumanizing effects. Charlie Sheen plays Chris Taylor, whose idealism drives him to leave college for the hellish jungles of Vietnam. He sheds his innocence quickly, however, as the horrors of war take a heavy toll on his body and his sanity. After witnessing acts of barbarity by fellow soldiers–including rape and the deliberate killing of civilians–Taylor becomes aware that he is fighting not only an external enemy, but an inner one as well.

Representing the sides of this internal battle are Sergeant Elias (William Dafoe), who shows compassion towards his men and is outraged by atrocities he witnesses, and Sergeant Barnes (Tom Berenger), who displays no regard for human life. With their sanity pushed to its limits by the terror of combat, members of the platoon are torn between the two men and begin to turn on each other.

This film is disturbing in its brutal realism, and the painful questions it raises remain relevant decades after the Vietnam War, particularly in light of incidents such as the Haditha massacre and the overwhelming numbers of Iraq veterans struggling with PTSD. Platoon sheds light on the conditions that breed atrocity and the devastating psychological effects of war upon soldiers. It is not an antiwar film, nor one with a political agenda; it is simply a raw, candid film about war’s impact.
Movie Quality: 9.5/10

The print is presented in 1080p/AVC MPEG-4 with a 2:35:1 aspect ratio. ‘Platoon’ on Blu-ray finally has received a very good transfer which has made me very happy. Colors are strong and accurate throughout just looking very natural. Blacks are deep. There is a fine layer of grain. Details and clarity are both great and really helps with this 1080p transfer for larger screen viewings. If you already own this on DVD, and are a fan of the film upgrading to the Blu-ray version would be recommended.
Print Quality: 9/10

The audio is presented in a DTS-HD MA l0ssless 5.1 mix. This is an intense and complex audio experience you will not be disappointed. The soundfield is always immersive when there is action. It is done so well that you feel as a part of the experience. Dialogue is clear and crisp through the center channel with no apparent issues.
Print Quality: 9/10

Platoon is Oliver Stone at his best. In addition to four Oscars, the film harvested a long list of Academy Award nominations and several display cases full of other awards. All with good reason and well earned.
Overall Rating: 8/10