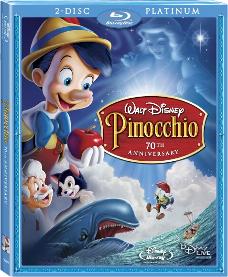 Celebrate the 70th anniversary of Walt Disney’s Pinocchio! The legendary masterpiece that inspired millions to believe in their dreams has reawakened with an all-new, state-of-the-art digital restoration that shines brilliantly on 2-disc DVD. Now, for the first time ever, the richly detailed animation, unforgettable award-winning music When You Wish Upon A Star and heartwarming adventure-filled story comes to life like never before. Plus, all-new dazzling bonus features transport you into Pinocchio’s fantastic world! Join Geppetto’s beloved puppet with Jiminy Cricket as his guide on a thrilling quest that tests Pinocchio’s bravery, loyalty and honesty, virtues he must learn to become a real boy. The one and only Pinocchio will live on forever in the heart of anyone who has wished upon a star.

Walt Disney said that he considered “Snow White” to be his masterpiece. While ‘Pinocchio’ is not the most popular film to come out of the Disney vault, it is a very good animated film. The story of a puppet trying to become a boy has a meaning that will be obvious to adults – try to be good and you will succeed despite the odds.

Almost as soon as Pinocchio goes out into the world, ostensibly to go to school, he encounters mischief in the form of Honest John (Walter Catlett). Honest John quickly sees opportunity in selling Pinocchio to a showman. Pinocchio gets out of trouble and then right back into trouble, ending up in Pleasure Island where boys make jackasses out of themselves. Fortunately Pinocchio escapes before completely changing into a donkey.

However, Pinocchio’s troubles are just beginning. When Pinocchio returns home he discovers that Geppetto has gone searching for him, and has yet to return. Learning the Monstro the Whale may have swallowed Geppetto, Pinocchio goes seeking Monstro, finding him. The encounter with Monstro, the rescue of Geppetto and the end of this movie forms one of the greatest endings of any animated movie.
Movie Content: 4.5/5 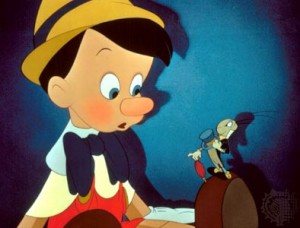 The print is presented in 1080p/AVC MPEG-4 with a 1.33:1 full frame aspect ratio. Compared to the previous out of print DVD release, this film is a rather impressive spectacle on Blu-ray. The film is not in widescreen for those looking or asking if it is, as its available in its original aspect ratio. The main characters like Pinocchio and Gepetto receive a bump in the use of colors as they do carry a pop due to the bold colors. The rest of the colors have also received a slight bump, but they still carry that muted/muddy look, but is nowhere near a bad thing. Black levels are so well defined and offer depth that I didn’t expect. Shadow delineation is also defined very well bringing out the colors and making them more alive on the main characters. Details are excellent when focus is on the characters. All in all, I was very impressed at how good a 70 year old film looks in high definition.
Print Quality: 5/5

The audio is presented in DTS-HD MA lossless 7.1 mix. There is also a remastered mono track available for those that want to listen to the original track. Pinocchio is a front heavy experience with occasional effects from the rears. Dialogue is handled very well through the center channel with very clean and clear presentation. If Disney engineers can do this with a film that is 70 years old, I can only imagine what they will do once the remainder of their catalogue starts to debut on Blu-ray.
Audio Quality: 4/5 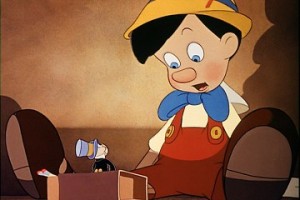 When You Wish Upon a Star [HD] – An all-new music video starring Meaghan Jette Martin (Camp Rock) performing an all-new version of “When You Wish Upon A Star!” Obviously a version to bring any the younger listeners but really, nothing can beat the original version sung by Cliff Edwards.

Pinocchio’s Matter of Facts [Popup Trivia] – Learn fun facts about Pinocchio and other related subjects as you watch the movie.

Disney Song Selection – This section allows the viewer to listen to the music portions from the film.

Movie Mail – Blu-ray owners will be able to record a personalized video message send it to others.

Deleted Scenes [HD] – In the Disney vault, storyboards for deleted scenes and an alternate ending were found. Without spoiling any of these, the following scenes are:

The Sweat Box [HD] – Small projection room at the Disney studio where Walt critiqued story reels, rough animation, and dailies of films in progress with his artists.

Geppettos Then And Now [HD]– A look at the art of toymaking as it has evolved into the 21st Century.

Live Action Reference Footage [HD] – Older footage of how live action was used in the film.

DVD version of the film.

All Bonus Features are presented in high definition where noted. Disney continues to impress with their releases on Blu-ray with the assortment of special features and Pinocchio is no different. There is some very good special features here that would make fans of the film very happy and good old Walt would be proud. I do like that Disney is including the DVD version of the film as part of the entire package. If anything, this is the route that studios should start taking  which can help slowly move everyone to high definition. 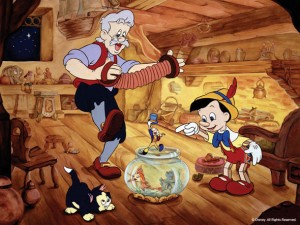 ‘Pinocchio’ is a very underrated film in the Disney vault as its not their most popular title, but one of their more well known. I have seen this film several times over the years and I am very impressed with how everything turned out on Blu-ray from the video, audio, and special features. While this may not be a stunning transfer, for a 70 year old film this looks very good even outclassing big budget animated films. I highly recommend picking this film up on Blu-ray as you will get the best overall experience.
Overall Rating: 4.5/5