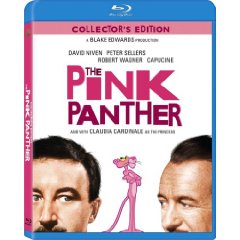 Blake Edwards’ ‘Pink Panther’ has held up well over the years. It is, of course, the start of one of the funniest and most popular comedy series of all time. However, while the subsequent films focus on the antics of bumbling Inspector Jacques Clouseau (Peter Sellers), Clouseau is almost a supporting character in this film. Most of the focus is placed on Sir Charles Lytton (David Niven), an irresistible middle-aged bachelor who is secretly “The Phantom”, a world-famous jewel thief. He decides to steal the Pink Panther diamond, the most valuable jewel in all the world.

But some things stand in the way of The Phantom’s biggest heist. For one thing, the jewel belongs to Princess Dala (Claudia Cardinale), an intelligent woman who may see through Charles’ plan. For another, Charles’ handsome young nephew, George Lytton (Robert Wagner) has recently popped up and threatens to expose not only The Phantom’s plot, but Charles’ affair with Simone (Capucine) as well. Unknowingly, Simone’s husband, Inspector Jacques Clouseau, is stuck right in the middle of it.

The cast, as one may guess, is wonderful. The greatly charismatic Niven is perfectly suited for the role of The Phantom, as is young Wagner as his rather pigheaded nephew. Although Sellers’ role is smaller than it would be in the films that followed, Sellers shines as the hilariously bumbling Inspector Clouseau.

Though the ‘Pink Panther’ films of the 1970s were still extremely funny, they weren’t as artistic or as thought-out as those of the 1960s. Director Blake Edwards proves that he knows how to make a caper comedy, and how to make it well. His script, co-written with Maurice Richlin, continuously creates outrageous situations for the characters to mess around with.

Of course, who could forget Henry Mancini’s utterly fantastic music? The “Pink Panther Theme” is classic, and the rest of the music, whether beautiful or just plain silly, is great. The film’s original song, “It Had Better Be Tonight”, is terrific as well.
Movie Content: 5/5 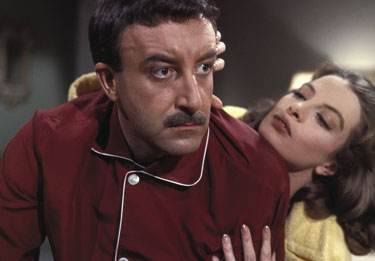 The print is presented in 1080p/AVC MPEG-4 with a 2.20 aspect ratio. While colors won’t jump right out at you this film maintains that look and feel of the eras it is representing. Details are very good with this print. Then there are a few scenes where the film loses some detail as the camera pans away providing a blurred image. There are issues with some white specs and dirt on the screen. Black levels are also very strong, except a few scenes were a bit too dark.
Print Quality: 4.5/5

The audio is presented in a DTS-HD MA lossless 5.1 mix. While the rears aren’t going to win any awards for producing the most dynamic sound mix, they do a find job during times when the score is introduced into the mix or there is any kind of action going on at the time. The dialogue, which is a very important part of this film, comes through very clear and crisp.
Audio Quality: 3.5/5

MGM has ported over all the features from the special edition version of the DVD plus the addition of features in 1080p high definition. This is an excellent choice as Blu-ray films should contain an ample amount of high definition special features.
Special Features: 4/5

If you haven’t seen ‘Pink Panther’, I can’t imagine a reason to stop you from doing so. Go out and watch this film now. More than forty years after its release, it’s still one of the most delightful comedies ever made.
Overall Rating: 4/5