Posted in Blu-ray Reviews by George Theofanopoulos on 27 September 2011
Based on the original show that launched Pee-wee Herman into an American pop culture icon, Paul Reubens’ beloved quirky character brings his Playhouse to life once more. The Pee-Wee Herman Show On Broadway was shot at the Stephen Sondheim Theatre in New York City in January 2011, immediately following the conclusion of its wildly successful Broadway engagement. The 90-minute HBO special is filled with subversive humor and childlike wonder based both on Reubens’ original stage show The Pee-wee Herman Show and the Emmy-winning Saturday morning television show Pee-wee’s Playhouse that quickly became a cultural phenomenon. 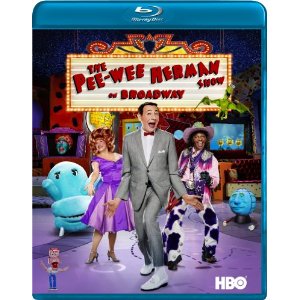 I have always been a Pee Wee fan and even enlightened my own kids to his movies and show. When we read about his Broadway show (and were visiting New York) there was no way we were going to miss him live!! And the show lived up to every one of our high expectations! Yes, the cast is older, but no less wonderful. The show features some current pop-culture, but mostly lets you relive Pee Wee in all his glory. I felt like I was a guest in the Playhouse!

There is lots of tongue-in-cheek/double entendre stuff here (and Pee Wee’s abstinence ring!), but my kids laughed the entire time, even if they didn’t “get” the jokes the same way those of us growing up with Pee Wee Herman would

The Pee-Wee Herman Show was a successful performance which catapulted Paul Reuben’s career beyond his own imagination. This show on broadway is just as fun as the days when I would watch the show when I was younger.
Overall Rating: 7/10