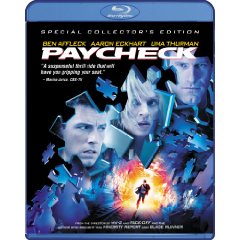 The brainy, paranoid science fiction of writer Philip K. Dick has inspired one visionary classic (Blade Runner) and two above-average action movies (Total Recall and Minority Report). Paycheck aspires to follow in their footsteps: An engineer (Ben Affleck, Chasing Amy) routinely agrees to have his memory erased after every job so that he doesn’t know what he’s done. But after the biggest job of his life, he discovers that not only has he refused a $90 million paycheck, he’s sent himself an envelope full of things he doesn’t recognize–and he doesn’t remember doing any of this. As he unravels the plot, he discovers he’s also fallen in love (with Uma Thurman, Kill Bill) and invented a dangerous device for his former boss (Aaron Eckhart, Erin Brockovich). Affleck is bland, the script ruins a cunning idea, and the direction–from the normally dynamic John Woo (Face/Off)–plods along, aimless and bored.

The plots of most sci-fi movies are ridiculous. The good ones, though, cause us to suspend disbelief, at least until after the movie is over. The great ones make us want really to believe the premise and to cast logic to the wind. ‘Paycheck’ just didn’t do it for me.

The other problem is Ben Affleck as the main character. I don’t know if he really can’t act, or if he has lately been so preoccupied that he doesn’t feel like acting. Here, he tries vainly to act against the fine Mr. Eckhart and the incredible Uma Thurman. One might say that, for example, Harrison Ford can’t act, but he is very, very good at being Harrison Ford, the Star. Mr. Affleck can’t even do that.
Movie Content: 7/10

The print is presented in 1080p/AVC MPEG-4 with a 2.35:1 aspect ratio. he film is very colorful throughout. Colors are vibrant carrying a more natural color palette. Blacks are also very strong and deep. With strong colors and deep blacks, it brings out the fine details. Details are very good. Fleshtones also look very natural. The print is as clean as a whistle with a very pristine look. I was rather surprised as to how good this film looked on Blu-ray.
Print Quality: 9/10

The audio is presented in Dolby TrueHD 5.1 mix. I couldn’t believe how dynamic the sound effects and the soundtrack were across all surrounds. From gun shots to action heavy sequences, you will feel like the action is taking place right in your living room. Bass management is also well done in this film. Paramount engineers have also nailed down the use of proper bass management in their films. With the film split between action and dialogue, voices come through the center channel rather clean.
Audio Quality: 9/10

‘Paycheck’ is a film that has its fans, but I am not one of them. The over the top action and themes of the film were what turned me off. The image and audio on Blu-ray are top notch providing an excellent presentation for a catalog title on Blu-ray in high definition.
Overall Rating: 8.5/10