Posted in DVD Reviews by George Theofanopoulos on 01 July 2011
The movie, at first I thought was a typical late 1980 movie with fewer actors than newer films and a compact plot. But later I did quite a bit of reading on Patty Hearst following through Wikipedia. The first thing I noticed was that the movie had woven the facts together quite well. Yes, there are a few anachronisms as mentioned in an earlier comment, but I could catch just one of them. Things blend into the movie quite well as far as the victim is concerned. When the movie was made they had no way of knowing that 20-Jan-2001, the real Patty Hearst was given a full presidential pardon after analysis of the case which revealed that the defendant’s lawyer was in most likelihood drunk on the day of trial. The movie doesn’t concentrate on the trial, but more on the experiences making it a treat to watch. 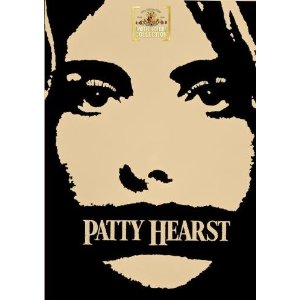 California is drenched in sunshine. But Patty Hearst, member of one of the most famous and in the public opinion most wealthy families of the USA is brutally thrown into darkness. The California sun is still out there, you can almost feel it, some rays come through, but the light is most of the time shut out by walls or curtains. Once the nineteen-year-old woman reemerges, she is a revolutionary, called Tanya – like Che’s lover, you dig?

This highly interesting, very stylish and well crafted movie tells about the ordeal, the disorientation, the reprogramming and the re-reprogramming of a young person who seems to be very much alone while trying to endure these transformations that are forced upon her. Any notion of society seems to dissolve into sheer madness. This retelling of actual facts, which is done exclusively and in straight chronological order from Patty’s point of view, might or might not be a „doctored” account of events, it certainly is convincing and allows the viewers to commiserate with the main protagonist. She concludes at the end that society probably would have preferred her dead, and after seeing the movie one must say she has a point there (for this aspect it might be interesting to check out Robert Aldrich’s The Grissom Gang).

The group dynamics and the insane pseudo revolutionary gibberish (sounds terribly dated!) has a real feel to it, all actors are believable in their roles. I thought that Ving Rhames was particularly effective as the group’s leader, Cinque (and now I know that the name is not pronounced like the Italian word for the number five). Besides Natasha Richardson the performance of Jodi Long also caught my attention. Reminded me a little of Mercedes McCambridge. I hope I will be able to see her in other roles.
Movie Quality: 7/10

This film marked the end of Paul Schrader’s directorial peak, but it’s well done, well acted, character development and symbolism are in full use of the story, and it deserves a much higher rating than it has. If you’re a fan of Schraders work, don’t miss it, if not, well decide for yourself.
Overall Rating: 7/10