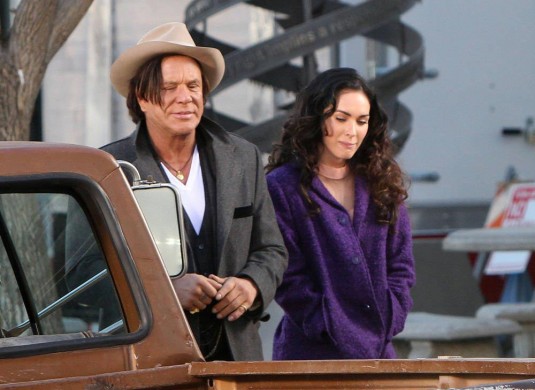 A terrific cast will hold you spellbound in this one of a kind seductive thriller from the screenwriter of The Recruit. The last thing washed-up jazz musician Nate Pool (Academy Award-nominee Mickey Rourke, The Wrestler) wanted to do was betray sinister gangster Happy Shannon (Academy-Award-nominee Bill Murray, Lost in Translation). But it may be the last thing he does unless he can deliver Lily (Megan Fox, Transformers), a beautiful and mysterious carnival sideshow attraction. The stakes can’t get any higher for the two lovers as they try to elude the merciless killer who will stop at nothing to keep Lily for himself. Kelly Lynch (Drugstore Cowboy) and Rhys Ifans (Notting Hill) costar in this gritty and unpredictable tale of redemption in the hard-boiled tradition of classic film noir. 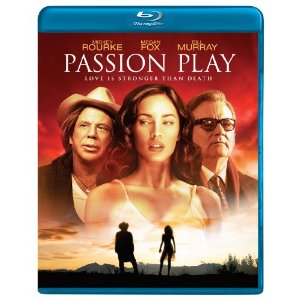 Passion Play involves a character by name Nate Pool (Mickey Rourke), portrayed as a jazz man whose life is a mess and who stumbles across a carnival in the middle of the desert. He comes to the rescue of the carnival’s main attraction, the freak show’s “Lily” (portrayed by lovely Megan Fox) a woman gifted with beautiful wings and is faced with the choice to love and defend this beautiful angel and start a new life, or to use Lily to settle scores with a long-time rival (Bill Murray) in order to clean up his old life.

Despite beautiful Megan IMHO who plays her role amicably well and with two legendary and cult-worthy actors like Mickey and Bill the overall presentation of the film is somewhat freaky and dark and lacks depth and motivation. The director probably intended it to be sort of poetic but the combination of items somewhat did not fall in the right places.

This film cannot be a must have as it lacks luster, but for people who love dark freaky films especially with lovely Megan Fox and classic actors like Bill Murray all in one package it is worth a buy for them but for others my advice would be rent it to watch once or may be twice.
Movie Quality: 6/10

The print is presented in 1080p/AVC MPEG-4 with a 2:40:1 aspect ratio. ‘Passion Play’ looks pretty good on Blu-ray which surprised me considering the lower budget for this film. The image quality is rather sharp with some excellent details on display. Colors stand out very well with quite the pop looking very good. Blacks levels appeared to be deep, except for a few night scenes which did not look as good. I found the print to be crystal clear with no artifacts or print damage. The CGI doesn’t look that great in high definition and look a bit on the hokey side. Grain is prevalent throughout the film, but never an issue.
Print Quality: 9/10

The audio is presented in a DTS-HD MA l0ssless 5.1 mix. This film will not win an award for aggression in the audio department as this mix is on the simple side. When I mean this is a simple kind of audio, this is a dialogue driven film with a more front heavy experience that never deviates from its true source. There is some audio coming from the surrounds, but nothing that will catch the world on fire.
Print Quality: 8/10

I thought the movie was decent and honestly surprised at Megan Fox as she played her part quite well. It did seem a strange pairing at first with Mickey Rourke and Megan Fox. I understand the storyline and why it eventually worked and found it a little creepy with the two of them as lovers.
Overall Rating: 6/10