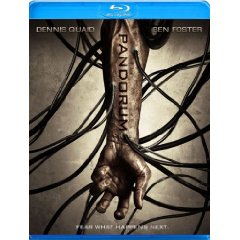 In Pandorum, Dennis Quaid (Vantage Point, The Express) and Ben Foster (3:10 to Yuma, Alpha Dog) join Cam Gigandet (Never Back Down, Twilight), Cung Le (Tekken, Fighting), newcomer Antje Traue, and director Christian Alvart (Antibodies) to tell the terrifying story of two crew members stranded on a spacecraft who quickly – and horrifically – realize they are not alone. Two astronauts awaken in a hyper-sleep chamber aboard a seemingly abandoned spacecraft. It’s pitch black, they are disoriented, and the only sound is a low rumble and creak from the belly of the ship. They can’t remember anything: Who are they? What is their mission? With Lt. Payton (Quaid) staying behind to guide him via radio transmitter, Cpl. Bower (Foster) ventures deep into the ship and begins to uncover a terrifying reality. Slowly the spacecraft’s shocking, deadly secrets are revealed…and the astronauts find their own survival is more important than they could ever have imagined.

All the comparisons everyone are making when reviewing this film, and no one seems to have lit on the same one I did: Paul W. S. Anderson’s, film ‘Event Horizon’, to which this is a brother in just about every way. With my feelings that this film is similar in some ways to ‘Event Horizon’, I also felt like this could have come close in some ways to a movie rendition of ‘Dead Space’ with lots of gratuitous gore and a little bit of story on the side. What a pleasant surprise this film was which it will probably slide under the radar. It turned out to be more of a psychological mystery-thriller than a slasher, the story was meatier than the gore and the sci-fi was plentiful enough to satisfy my geeky appetite!

I’m not saying it isn’t spooky but the scary aspects are outweighed by the other devices in the movie so that I would not label this as a horror flick (although it does graphically show the all-time most horrifying way to wake up from a deep sleep). You do need to pay attention to the dialogue and visual cues in the movie if you want to understand most of what you are seeing, so plan on focusing and listening.

I was pleasantly surprised how good Pandorum turned out to be. At first I thought this was an original typical horror film that you can predict. Boy was I wrong! This is an intelligent pyschological thriller that loves to play games with you from start to finish. Despite a few bad scenes in this movie I thought could of done a little better, the ending of Pandorum is the main highlight. Pandorum will not be for everyone. But if you enjoy these pyschological and twisted thriller movies that will keep you guessing to the end, then check this out! You probably won’t be disappointed!.
Movie Quality: 9.5/10

The print is presented in 1080p/AVC MPEG-4 with a 2.35:1 aspect ratio. This is one dark film with various dark colors standing out. The color palette varies from strong, lush, and bright to dull looking. The reason is due to the film’s nature, certain colors such as reds stand out the most. Black levels are deep with an ink like look. Details are excellent providing various sense of depth. Scenes up close and when the camera pans away show provide stunning details. This is a great example of how darker looking films in this genre can look if done right.
Video Quality: 9/10

The audio is presented in Dolby TrueHD 5.1 mix. This is a demo worthy mix that could easily sell those on the fence about the format. The soundfield is immersive at all times no matter if it is the special effects or dialogue. I was literally amazed with the amount of bullets panning from each speaker in the rears. It sounded as if there were bullets ricocheting off of the walls in the room. Bass was punchy as it shows with the amount of gunfire and explosions. Dialogue is also well placed in the center channel sounding crisp and clear. The best part of this all around aggressive soundtrack is that it is well balanced between the dialogue and sound effects.
Audio Quality: 9.5/10

I enjoyed ‘Pandorum’ quite a bit and it was one of the better sci-fi films in a longtime that hasn’t received the proper respect. This film reminds me quite a bit of ‘Event Horizon’ in so many ways which is another classic in my eyes and a cult classic. On Blu-ray, ‘Pandorum’ has excellent video and audio presentation, considering that the film has many darker scenes where others have failed. ‘Pandorum’ is highly recommended.
Overall Rating: 9/10