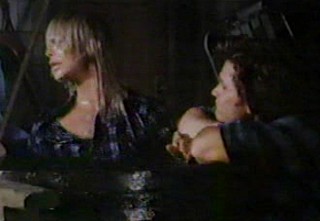 Real-life couple Kurt Russell and Goldie Hawn star in this enjoyable 1987 comedy by Garry Marshall (Pretty Woman) about an imperious heiress (Hawn) who loses her memory after a boating accident and is identified as the wife of a handyman (Russell). Russell’s character brings her “home” to his messy house and unruly kids, and the laughs follow as the aristocratic Hawn tries fitting in. Marshall delivers the comic goods, the leads are entertaining (Russell needs to do more comedy), and the supporting cast is made up of happily familiar faces, including Roddy McDowall, Edward Herrmann, and Marshall favorite Hector Elizondo in an unbilled bit. 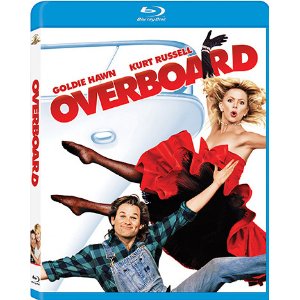 A five star cast, hilarious dialogue, great comedic timing, and marvelous chemistry between Hawn & Russell easily adds up to more than five stars worth of fun. Supporting cast members like Roddy McDowell, Katherine Helmond, and Edward Herrmann make more than the most from their roles, and really shine. The actors who portray Mrs. Berberich, the school principal, and Dr. Korman, the psychiatrist, really do their part to add comedic punch as well.

The movie opens with Goldie Hawn as JoAnna Stayton, a bored, pampered, demanding and imperious heiress–husband Grant is an equally shallow and pompous aristocrat. They openly despise each other, treat the help like servants, are enamored with possessions over people, and are proof positive that money does not buy happiness.

Enter Kurt Russell as carpenter Dean Profitt, hired to build a new closet on the Stayton yacht. When petualnt Hawn refuses to pay him for his work and knocks him overboard, Russell vows he will make her pay. He soon gets his chance when JoAnna falls overboard herself and husband Grant is too preoccupied watching Lifestyles of the Rich & Famous (ostensibly to see if he made it onto a list of the top ten yacht owners!) to hear her cries for help and save her.

Once rescued and suffering from amnesia, JoAnna is taken to the mental ward of a local hospital where she terrorizes staff members with her fits and vicious snits. Only too glad to be rid of her, they fall for Dean Profitt’s story that this is his missing wife, Annie, and he is permitted to take her “home.”

The Profitt “residence” turns out to be a down-and-out homestead reminiscent of the farm from Green Acres, complete with car parts and debris all over the yard, a limping dog in a cast, and four unruly boys demolishing everything in sight. Watching Hawn acclimate to this nightmare is totally hilarious. At one point she sighs…”So, this is my life….I didn’t marry very well, did I?” Too, too funny!
Movie Quality: 9/10

The print is presented in 1080p/AVC MPEG-4 with a 1:85:1 aspect ratio. ‘Overboard’ holds a rather soft image throughout with a muted color palette. Details aren’t lacking at all, but they are rather inconsistent throughout the film. Much of this has to do with the age of the film and being shot on a smaller budget. Blacks are solid throughout the print. There is a lot of grain throughout the film and at times can get very heavy. It doesn’t look like a lot was done with this transfer except for giving this an anamorphic transfer.
Print Quality: 5/10

The audio is presented in a DTS-HD Master Audio 2.0 mix. This is great for a film that is dialogue heavy with crisp and clean sound through the center channel. With this being a 2.0 mix, all your sound is coming from the fronts.
Print Quality: 6/10

By movie’s end, Hawn has transformed the unruly household into a happy family home, fallen in love with Russell and his children, and morphed into a real human being. A funny, funny movie with a feel good ending, Overboard is highly underrated. I urge you to watch it and share the humor!
Overall Rating: 6/10