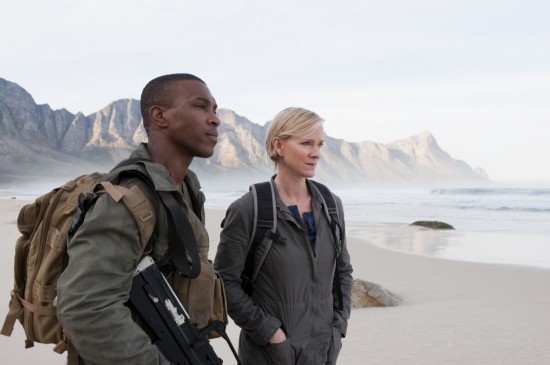 There is no denying the impressive track record of efficient, surprising, and fun science fiction programming that the BBC network has championed. Whether it is the contemporary Dr. Who, the risque Torchwood, the fast paced Primeval, the original Being Human, the intriguing Survivors.

There is no denying the impressive track record of efficient, surprising, and fun science fiction programming that the BBC network has championed. Whether it is the contemporary Dr. Who, the risque Torchwood, the fast paced Primeval, the original Being Human, the intriguing Survivors or any number of other older programs–there really is a bit of everything for fans of the genre. The 2010 series “Outcasts” may be one of the more divisive of recent entries. Upon its television debut, viewers seemed to be instantly supportive or vocally dismissive. As with any TV show, people are going to think what they are going to think–but BBC ended the show after its eight episode first season run due to lack of a significant viewing audience. At once, the decision is completely understandable and somewhat disappointing. There is no denying that the show had some significant flaws, but as the episodes progressed–it seemed to be working itself out. Whether or not it would ever have developed into great television will never be known, but what we’re left with is an interesting show that fell short of success.

“Outcasts” takes it basic premise from an apocalypse drama with a band of colonists in 2040 trying to survive after a catastrophic event on Earth. Arriving on a primitive new planet, the band must face the problems inherent in structuring a new society under vastly different conditions. Of course, there are different interpretations of how to build a better world and idealism, practicality, and opportunism meet with increasing frequency. On an immediate positive note, the show looks tremendous. Shot in South Africa, it is some beautiful desolation matched by better-than-average effects for a television program. But striving for a realistic tone, the show is hampered (especially initially) by lethargic pacing, ham fisted screenplays, and a perpetually downbeat feel that fails to distinguish its primary characters to any degree. The premiere, in my opinion, is especially dour bordering on uninvolving–but things tend to be shaping up by Episode 4. Then again, there are only 8 episodes.
Movie Quality: 9/10

The audio is presented in a Dolby Digital 2.0 mix. While I am not surprised that Warner would go with a Dolby Digital 2.0 mix here and not a lossless which doesn’t help the format. It is 2011 and we should be at lossless audio for our Blu-ray releases. Dialogue was front and center with no apparent issues sounding crisp. The soundfield was rather active anytime there were effects in the soundfield even though this is a dialogue driven television show. I do think that this could have sounded even better with lossless audio mix.
Print Quality: 8/10

Outcasts was an interesting show that was getting better and better as the season progressed. With so much unimaginative and mediocre programming on TV it’s hard to believe a show like this was cancelled so prematurely.
Overall Rating: 7/10