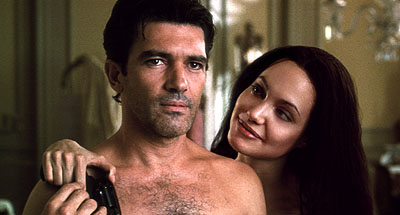 Original Sin belongs in the “so bad it’s good” category of languid potboilers, offering enough nudity, sexual chemistry, and far-fetched plotting to make it an enjoyable lazy-day diversion. Based on Cornell Woolrich’s novel Waltz into Darkness (previous filmed by François Truffaut as Mississippi Mermaid) and set in turn-of-the-century Cuba, the film traces a tailspin of amorous obsession when coffee plantation owner Luis (Antonio Banderas) discovers that his American mail-order bride (Angelina Jolie) is not the plain wife he’d expected, but a beautiful, scheming thief who’s after his fortune. The movie asserts that love is truly blind, but absurd twists of plot make Luis appear more stupid than passionate. Writer-director Michael Cristofer fared better with Jolie in Gia; here, he’s made another good-looking film about beautiful people, but its plot just can’t be taken seriously. 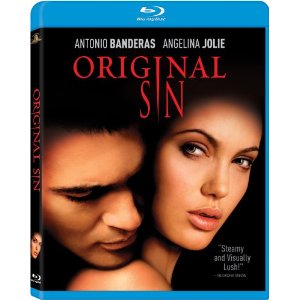 This 2001 film stars Angelina Jolie and Antonio Banderas and is set in 1900 Cuba. He’s a wealthy landowner who has sent away for a plain Jane mail order bride. Much to his surprise, the woman that steps off the ship is Jolie, a real babe. There is an immediate attraction and soon they are married, having a great time with each other with lots of romantic scenes. This is soon to end, however, when he discovers that she has deceived him. The woman he was supposed to marry has disappeared. And who, exactly is this beautiful creature who fate has brought to his door? This is just the first half hour of the film, however, and from here on there are ups and downs and lots of deceptions. The man is smitten and Jolie has him wrapped around her finger. The plot thickens.

I’ve never thought much of Jolie as an actress. That is why she is so perfect for this part. She’s supposed to play a “bad” actress, and the role calls for a lot of “over-acting”. This made me enjoy her performance. And she also wears beautiful clothes and is a pleasure to look at. Antonio Banderas is completely believable as the man who she makes jump through hoops. But he doesn’t really get much sympathy because he lets her do it to him. And, in a funny way, it is Jolie who I wound up empathizing with. She’s cast as a survivor and it’s a good role.

There is certainly too much melodrama in the production. And the situations are just often just not believable. This is a decent film and is worth checking out if you have nothing else to keep you entertained.
Movie Quality: 7/10

The print is presented in 1080p/AVC MPEG-4 with a 2:35:1 aspect ratio. For a film that was released just 10 years ago, this print does not look good. There are plenty of issues which holds this film back. Color is on the soft side looking on the murky side. I found black levels to also be lacking looking rather flat. Then add the loss of details even with up close shots and then things get worse when the camera pans further back. The other issue is how the print is not clean at all with scratches and white little specs rearing their ugly head throughout the entire print. This Blu-ray release looks like a bad DVD that has been upconverted with no positive results.
Print Quality: 4/10

The audio is presented in a DTS-HD Master Audio 5.1 mix. I found the audio to be the saving grace of this Blu-ray release even though its not the kind of audio that will knock your socks off. With this film being dialogue centric do not expect your soundfield to be booming throughout the entire film. Not much is pouring through the rears if anything. Dialogue comes through the center channel very clear and crisp. The audio is a bit better than I expected when compared to the video quality.
Print Quality: 7/10

Ultimately, the message is clear: you can’t get away from love. Or obsession, or stupidity, or lust. You just cannot get away. We are stuck in this world–the only world we’ve got, and the only world we know something about. ‘Original Sin’ is a decent movie if you have nothing else to do on a Saturday afternoon, but this Blu-ray release is mediocre.
Overall Rating: 5/10