Posted in DVD Reviews by George Theofanopoulos on 05 August 2020

Following the fifth season’s prison-wide riot over the series-shifting death of inmate Poussey Washington (Samira Wiley), the sixth season narrowed the sprawling ensemble cast as it followed a core group of inmates down the hill to the maximum security prison of Litchfield. Other characters were bussed to separate destinations and either briefly shown or not seen again. After doling out consequences to the organizers and violent offenders during the riot — including the group of high-profile inmates who hid out in the prison pool — the “riot girls,” as they became known, were faced with abusive guards, inmate gang leaders and worsened conditions as the private Max prison revealed itself to be a much more treacherous and corrupt home than the “camp” Litchfield to which they had grown accustomed. 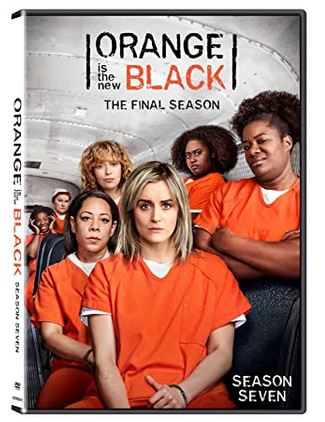 The seasons had their high and low points like any show but once again, after Weeds, Jenji Cohen delivered a wild, funny, violent, yet thoughtful series. I think all the story lines ran their course and it didn’t drag on too long. I loved the beginning, the ending, and most of the in between. What began as a show that quickly drifted so far away from Piper Kerman’s story that it ceased to become any form of a true story, became an outlet for different subjects that needed to be addressed. They addressed problems in the prison system, they addressed the black lives matter movement, the pitfalls in immigration, and rape. They also delivered a ton of humor and a cast of colorful characters who were constantly developing, whether for good or bad. This show was responsible for a lot of people binge watching.

The start was a little rocky, but each season grows on you, getting better and better with more interesting plots. Each episode is filled with a very well written story that’s fun, interesting and heartfelt. The entire show does contain crude subject matter, language and has lots of sex in it, but if those things interest you, I would highly recommend this show! It is a shame that this show came to an end, but we should also be glad that Netflix gave this seven season which they normally do not.
Overall Rating: 8/10