Posted in Blu-ray Reviews, Sports by George Theofanopoulos on 30 January 2009 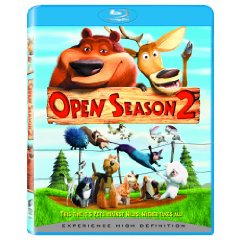 ‘Open Season’ was a rather entertaining film when released in 2006. With a total world wide box office of $189 million dollars, Sony Pictures animated film was rather successful. The budget was cut in half with the sequel, ‘Open Season 2’. Taking things a step further, we get an even entirely new cast that makes the two films at times almost feel a bit foreign even though the acting is better. Skipping the theaters and going direct to video doesn’t help this promising sequel either.

Elliot (Joel McHale) is having doubts of getting married to Giselle (Jane Krakowski) with their upcoming wedding. He just doesn’t feel like he is ready for such a big role. Elliot begins telling his best friend Boog (Mike Epps) about how he is feeling inside about this. It just eats away at Elliot more and more the closer he gets. Then another issue pops up when their friend Mr. Weenie (Cody Cameron) has been found by his original owners. The gang gets together to find Mr. Weenie. Not without yet another problem when they meet Fifi (Crispin Glover) that wants to cause trouble for them.

For those that have seen the original ‘Open Season’ you may miss Martin Lawrence and Ashton Kutcher. Both Epps and McHale do a fairly good job in their roles. I was really impressed by McHale the most as his voice comes off so much better than Kutcher in the same role with the original. Many times over, if an animated voice is lacking in enthusiasm it tends to lose the viewer.

‘Open Season 2’ felt like an extended episode as the writers tried to stretch out the material. The film is 70 minutes long, just barely over an hour long. With this film gearing more towards the younger crowd, it does make sense to a degree with the direction. The problem I had was that with this being a direct sequel to a very successful animated feature film it just lacked the punch to fully reel me in.
Movie Content: 2.5/5 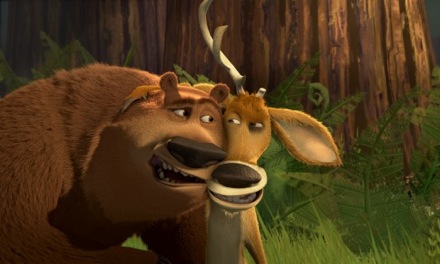 The print is presented in 1080p/AVC MPEG-4 with a 1.78:1 aspect ratio. Due to the lower budget, you can easily tell that the print is also affected here. Colors are rich and bold throughout, but with a very hot look to the colors. The animations do not come off as impressive as the original either. Animations do not feel fluid at times and then the background looks like a cardboard cut out at times.
Video Quality: 3.5/5

The audio is presented in Dolby TrueHD 5.1 mix. The mix is mainly a film with dialogue pushing the center channel which is crisp and clear. The surrounds do get their work too when we get songs off of the soundtrack.
Audio Quality: 4/5 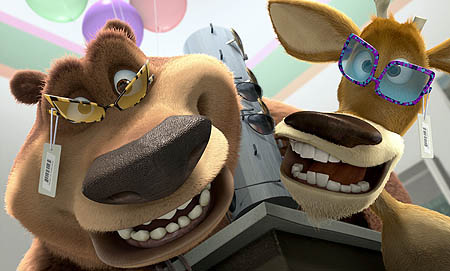 ‘Open Season 2’ in some respects is better than the original, but the story here falls apart to quick. Even with the core audience that ‘Open Season 2’ tries to attract, it does an alright job.
Overall Rating: 3/5 (Purchase for fans, Rental for others)