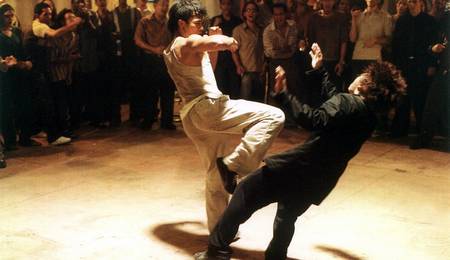 No computer graphic can ever surpass what a real human body can do–and what the body can do is on spectacular display in Ong-Bak, a Thai action movie starring the lithe and flexible Tony Jaa. When the head is stolen from a holy statue in Jaa’s rural village, he goes to Bangkok to get it back. Of course, it just so happens that the thief is connected to a bar where criminal big shots gamble over bare-knuckle brawls, and Jaa is–despite his virtuous efforts–drawn into the game. But that’s only the beginning; a chase through the city streets rivals the ingenious acrobatics of Jackie Chan, with Jaa leaping between panes of glass, over a bicycle in motion, and through a wreath of barbed wire. Jaa’s fighting prowess has been compared to Bruce Lee, Jet Li, and just about every other martial arts master, but he has an equal degree of charisma as well. He won’t win acting awards, but his engaging presence carries the movie. One word of warning: The numerous fights will make you wince as much as gape in astonishment. Ong-Bak follows the action-flick tradition that the hero needs to be as battered as possible before he ultimately triumphs, and the battering is intense. 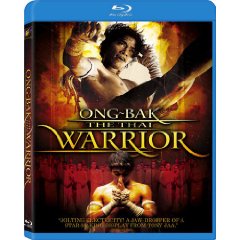 Everything you read in other reviews about Tony Jaa and “Ong Bak” is absolute truth – there are no wires or CG. And sometimes it seems this guy really outdoes both Jackie Chan and Jet Li (I’m saying “sometimes” and “it seems” just out of respect to Tony’s Chinese colleagues who are still awesome and mindblowing). Jackie and Jet, please do not retire after watching Tony Jaa’s movies!

The story-line is rather naive here and the one we’ve seen pretty often in martial arts cinema. But the plot is actually of no importance – if it was the film wouldn’t get that high ratings from viewers. It’s Jaa’s moves that draw everyone’s attention to the movie and what he does is just outstanding. I bet you’ll be replaying most of the scenes in slow motion to see how they’re done.

But to be honest “Ong Bak” didn’t impress me as much as another Tony Jaa’s film “Tom yum goong” which was released two years later – in 2005. Its plot also doesn’t matter much and it practically copies “Ong Bak’s” but believe me – it’s by far more spectacular and Tony Jaa demonstrates much more of his abilities there. If “Ong Bak” is mostly about fighting, “Tom yum goong” shows us more of Jackie Chan stuff like jumping and wall-climbing. Although some like it just fighting considering it more brutal.
Movie Quality: 9.5/10

The print is presented in 1080p/AVC MPEG-4 with a 1.85:1 aspect ratio. While I enjoyed the film and thought this was very well done, the transfer is another story. This film received a full blown restoration which is also talked about during one of the special features. Colors are rather muddy looking and on the weaker side of films I have seen on Blu-ray. With the image being rather muddy, it also affects the details of the film where they are lacking. Black levels are strong, which is the best part of the film. There is some grain throughout the film which is very apparent. The image also tends to break up in certain spots due to pixilation. I have a hard time recommending this disc as a replacement if you own the DVD already.
Video Quality: 4.5/10

The audio is presented in DTS-HD MA lossless 5.1 mix. I was disappointed with the video, but the audio is much better. There are two tracks available here, the Thai and English dubbed tracks. This is not a mix that will blow you away or make you jump off your couch. There is sufficient amount of effects in the soundfield, there could have been much more room for improvement. There were times where I felt that the sound design could have used more to bring out some of the action sequences. While certain areas of the mix fall to the way side, the soundtrack takes advantage of the DTS-HD lossless mix by filling the soundfield.
Audio Quality: 9/10

Overall I recommend “Ong Bak” even if you’re not a big fan of martial arts cinema – you’ll be utterly impressed. The thing that impresses me is that Tony Jaa is very young. I do have a hard time recommending to those looking to upgrade their DVD due to the lackluster video transfer. The special features are available in standard definition, but there is a nice amount offered on this disc to keep fans happy.
Overall Rating: 6.5/10