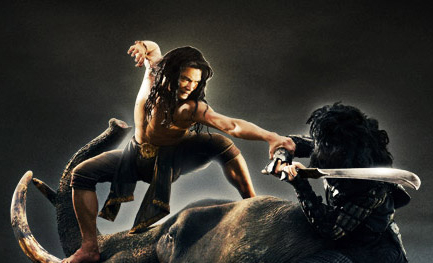 From the moment the crocodile leaps out of the muddy water, you know you’re in for some dynamic entertainment. What will surprise you is just how sweeping, inventive, and even beautiful this Thai martial arts movie can be. The plot of Ong Bak 2 is basic: A young prince sees his parents murdered by a usurping tyrant. Under the tutelage of a bandit chief, the boy grows up to be an astonishing fighter who sets out to take revenge. (There’s no need to see Ong BakOng Bak 2 is not kitsch or camp; it has the over-the-top romanticism that Western audiences sometimes resist–but if you surrender to it, Ong Bak 2 is a rich, rewarding movie experience. before seeing this film; the only thing they have in common is their star.) What lifts it above the ordinary are aggressive camera-work, acrobatic action sequences, and moments of dazzling, hypnotic loveliness (such as the Thai dance scene, shot with a stunning visual symmetry that falls somewhere between Busby Berkeley and Stanley Kubrick). And above all, there is Tony Jaa, who stars as the adult prince and co-directed. Jaa is one of those virtuosic physical performers–like Bruce Lee but also like Fred Astaire–who seem to channel some divine energy through human flesh. Not only is he is a peak athlete; he has a vulnerable, soulful charisma, which has nothing to do with acting ability but makes someone supremely watchable on film. 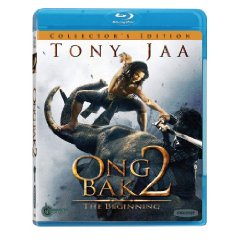 Some years have passed since the success of “Thai Warrior Ong-Bak” which launched action superstar Tony Jaa to superstardom and his follow up hit “Tom Yum Goong” (aka. The Protector). The much anticipated sequel to “Ong-Bak” had experienced quite a few obstacles during filming. Tony Jaa was at its helm as writer and director but for some reason, stopped production until his mentor Patta Rittikrai came to finish the film. This sequel occurs in a different period with different characters than the original; I wondered as to how it got the same moniker. I supposed the production folks wanted a familiar title for its audiences. Nonetheless, if what you are looking for is Martial Arts ACTION, “Ong-Bak 2” delivers.

A young man named Tien is orphaned when his family is murdered by a rival noble. Tien is found by a group of slave traders, and for some reason, the leader of the Pha Peek Krut Pirates, Cher Nung takes pity on the boy. Nung notices the young boy’s fighting spirit. The boy is trained in all manner of fighting and grows up (this time played as Tony Jaa). Now a highly skilled fighter and has overcome many tests of manhood, Tien is appointed second in command of the pirates. But there is an innate anger within Tien, he hungers for revenge. He seeks out the killers of his family but there is more to things that meets the eye. Tien must now fight for his life alone.

Granted, the plotline in Jaa’s previous films weren’t works of ingenuity and this film is quite the same. The plot in “Ong-Bak 2” is pretty routine and unimaginative. The details of story are shown in flashbacks, and quite honestly, there was effort in making an intricate storyline, but the execution is very weak. The film’s narrative stumbles and there are plot holes aplenty; certain parts of the film felt too rushed no doubt to meet its deadline. There are a few attempts at an effective twist, but it felt more like a throw-away detail since none of the characters involved were fully developed. Some characters come and go, and I failed to connect with the protagonists.
Movie Quality: 9/10

The print is presented in 1080p/AVC MPEG-4 with a 2.35:1 aspect ratio. This is one of those films that will make you happy being an early adopter of Blu-ray. From the colors to the details, your jaw will drop if you look for some of the superb details. Colors are vibrant providing an excellent looking picture. Flesh tones are natural and accurate looking. Blacks look inky. Details are where this film shines the most with the camera even panning away in many scenes. Not once did I feel like I was at a loss for details making this a very strong presentation.
Video Quality: 9.5/10

The audio is presented in DTS-HD MA lossless 5.1 mix. This is a very atmospheric and immersive sounding film. The rears provide quite a few times where sound effects panned across the speakers. There are many scenes that are outside which also take advantage of the soundfield providing some dynamic sound. Dialogue is clean through the center sounding ever so crisp.
Audio Quality: 9/10

“Ong Bak 2” is the type of film that stays aloft due to the number of action sequences and just how impressive they are; on this regard, it doesn’t disappoint. Sometimes we need a pure action film and this film is one of those bone-crushing, stylish, hyper-kinetic action films that action fans would talk about because of its fight sequences and never because of an intricate storyline. On Blu-ray this sequel offers excellent video and audio when compared to the original film having such lackluster presentation.
Overall Rating: 9/10