Posted in DVD Reviews by George Theofanopoulos on 23 August 2009 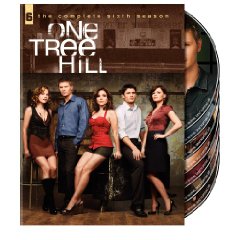 The sixth season of One Tree Hill features the progression of the relationship of Peyton (Hilarie Burton) and Lucas (Chad Michael Murray) as they plan their wedding and deal with Peyton’s dangerous pregnancy. Brooke (Sophia Bush), on the other hand, takes in a foster child, Sam, and comes to blows with her mother for control of her company. At the same time, a major storyline follows Lucas as his book is optioned for a film; Mouth (Lee Norris) and Millie (Lisa Goldstein) work on their relationship while Nathan (James Lafferty) and Haley (Bethany Joy Galeotti) attempt to reach for their individual dreams.

Peyton and Lucas got married and had a baby girl named Sawyer! To be quite honest, the series “One Tree Hill” has lost its touch from WAY too many story lines of having characters fight back and forth over the same things again and again. Brooke (Sophia Bush) continues to fight with her mother Victoria (Daphne Zuniga)in who has control over the “Clothes Over Bros” store. She has a continuing relationship with Julian (Austin Nichols) and in the end, tries to make him jealous by having a fling with Nick Lachey from the 90’s boy band “98 Degrees” and “adopts” the rebellious teen Sam Walker (Ashley Rickards). The basketball rebel Quentin Fields (Robbie Jones)life ends suddenly when he is an innocent bystander in a robbery. Nathan (James Lafferty) continues on his neverending quest to become a rising NBA star, (although I don’t understand how you can after you shave points in a high school basketball game). Lucas (Chad Michael Murray) gets offered to have his book turned into a movie and finds it hard to cast the actors and actresses to play the people in his life.

Peyton (Hilarie Burton)finds out that she might have cancer and the possible risk of it hurting her and her unborn child. Haley (Bethany Joy Galeotti) struggles in her career as a teacher and goes back to her roots as a singer/songwriter. Young Jamie (Jackson Brundage) deals with the sudden death of Quentin, the discovery of Skillz (Antawn Tanner) and his grandmother Deb (Barbara Alyn Woods)hooking up, and understanding the pains of growing up. From this season, I’m still wondering why Dan (Paul Johansson)was kept alive throughout this season even though crazy nanny Carrie (Torrey DeVitto) ran him over and attempted to make him suffer in anyway possible. Overall, this season was hugely disappointing in many levels.
Movie Quality: 7/10

These ‘One Tree Hill’ characters may think they’ve grown-up but really, they’re still trapped in the same high school drama. Hilarie Burton and Chad Michael Murray will not be returning for Season 7 and the producers hope to mix it up with new characters and the setting will be one year into the future. If you are a fan of ‘One Tree Hill’, you will not be disappointed by this season six DVD set.
Overall Rating: 8/10