Posted in DVD Reviews by George Theofanopoulos on 01 June 2011
In this spoof of the Transylvanian legend, David Niven stars as Count Dracula, who sinks his fangs into a bevy of Playboy Bunnies in order to find the right blood type to resurrect his dear-departed wife. 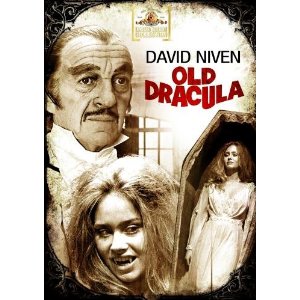 Count Dracula is an old vampire who, because of his advanced age, is forced to host tours of his castle to get new victims. In an attempt to revive his long-lost love, Vampira, Dracula sets out to collect blood from the bevy of Playboy Playmates living at his castle. However, one of the Playmates whose blood is drained is black, turning the revived Vampira into a black woman.

Dracula enthralls the hapless Marc to collect blood from three white women in hopes of restoring Vampira’s original skin color. Dracula transfuses the blood into her but she is unchanged; however, her bite turns Dracula black. Marc and his love Angela race to destroy Dracula but are taken aback upon seeing Dracula’s new skin tone. Their surprise gives the vampires time to slip away to catch a flight to Rio for Carnival.

This horrendous horror spoof stars David Niven, who manages to keep a stiff upper lip as the title character. The Count, by now too old to dine out, must instead host tours of his castle in order to lure fresh victims.
Overall Rating: 7/10