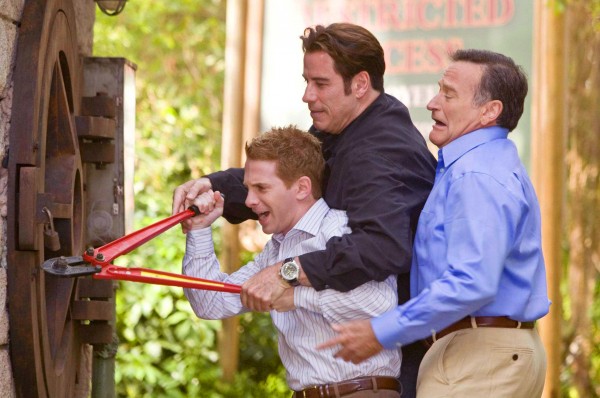 John Travolta and Robin Williams star in Old Dogs, the hilarious family comedy that will have you howling. Two best friends have their lives turned upside down when they’re unexpectedly charged with the care of seven-year-old twins while on the verge of the biggest business deal of their lives. The clueless bachelors stumble in their efforts to take care of the children, leading to one debacle after another, with a gorilla and some pecking penguins — and perhaps to a newfound understanding of what’s really important in life. Featuring a riotously funny supporting cast including Seth Green, Kelly Preston, Matt Dillon and Lori Laughlin, Old Dogs is a laugh-a-minute comedy filled with heart. 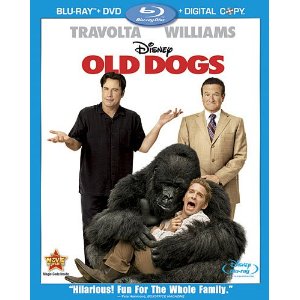 “Old Dogs” took a completely crazy idea and turned it into the most demented film that basically I would not even follow up to. It tells the story of two boys named Dan and Charlie. They are brothers. Dan’s longtime ex-wife is going on vacation and wants Dan to be in charge, like a father, as a babysitter. So it’s up to Dan and Charlie to be on the watch for his two children. Although, Dan is not that good with kids at all. They make up their own imagination and do fun activities like mentors. However, Dan starts his business in Japan which ends up into a disaster.

Believe the critics and me, “Old Dogs” is not that funny. It’s really stupid, dull, unappealing and demented. Mostly demented. I have seen Robin Williams making others laugh, even when his movies are bad, but this bad, forget it.

We have seen Disney do family comedies before. Dwayne Johnson did child care in “The Game Plan.” Adam Sandler did child care in “Bedtime Stories.” Vin Diesel did the same bad (to each his own) thing in “The Pacifier.” Now, do we need to see Robin Williams. Disney, famous people, give me a break. I’m sure though that Dwayne and Adam did better than Robin. I’m also sure that even Vin did better than Robin too. It’s one thing to see Tim Allen do this for many movies, because he was in two of the greatest Disney computer animated movies of the 1990s, “Toy Story” (and hopefully next summer with “Toy Story 3”), but still Tim Allen has the right to do something like that more than anyone else. Come to think of it, if this were more of Tim Allen’s story, then that movie would’ve been great. I think the best example of these kind of movies other than Robin Williams is Steve Martin.

I just don’t even care about “Old Dogs” even at the beginning. The dialogue is so godawful with too much crude bathroom jokes and offensive comic relief that maybe even a four year old wouldn’t even tolerate. If John Travolta was making a inappropriate sociopath smiley face over a funeral scene, we could tell that he was pretending to be The Joker in “The Dark Knight” without him mentioning it.
Movie Content: 2/10

The print is presented in 1080p/AVC MPEG-4 with a 1.85:1 aspect ratio. he print looks very good throughout without any apparent issues. Colors are vibrant and carry pop which brings out the fine details. The detailed scenes stand out very well. Blacks are deep. I found the print to be crystal clear with no artifacts or print damage. Overall, this is a fairly impressive print from Disney.
Video Quality: 9.5/10

The audio is presented in DTS-HD MA lossless 5.1 mix. This is not an audio mix that you will go in expecting huge things from the soundfield as it is primarily a dialogue driven film. The dialogue is clean and clear through the center channel with no apparent issues. I was rather happy with the way the film sounded considering that this was more of a dialogue centric film.
Audio Quality: 8.5/5

‘Old Dogs’ is not without some good laughs and some warm-hearted moments, but the man-discovers-kids theme and enlists friends for help was probably best in ‘Three Men and a Baby’. On Blu-ray the video is quite impressive looking that will make fans of the movie happy to own on HD. I would rent this film first if you are a fan of Williams and Travolta, but even they can’t save this film.
Overall Rating: 6/10

« Where The Wild Things Are DVD Review
Ponyo Blu-ray Review »