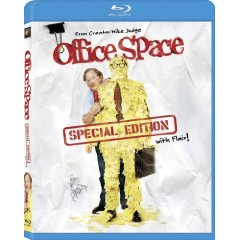 I will never forget the first time that I saw ‘Office Space’, which was about a year after it had originally released in theaters. At the time I had started working in the professional world having recently graduated from college. Upon my first viewing, I thought the film was funny, but didn’t make the connection as many others had. Then I saw the film once again on its DVD debut in 1999 and at that point having more experience in the work world, this film was even more hilarious than the first time around. It happens a lot with movies that are viewed once not fully making sense, but once you have a similar experience some of the ideas come together in a better light.

‘Office Space’ made a measly $10 million dollars at the box office, yet once it hit home video the film became a cult classic. Like the television show, ‘The Office’, once you have experienced similar craziness in an office setting this kind of film makes much more sense. Director Mike Judge did a great job bringing the intricacies of office life to a feature film. The relationships with co-workers, a boss that is aggressive yet out in his own little world, a copier/fax machine that gets on your nerves, and the thought that as human beings we were never intended to sit in front of a computer screen for an entire days worth of work.

What I enjoy about this film is that we spend a decent amount of time learning about each of the main characters. This is great because this film could have been a flop without character development. Peter Gibbons (Ron Livingston) is not satisfied with his job anymore at Initech. Initech has no clear direction which some employees like Peter clearly notice, while others are just going with the flow of the daily grind. With having an emotionally draining job, things aren’t better for Peter outside with his personal life. His girlfriend demands more from him and they must see a hypnotherapist to get Peter back on track, yet that doesn’t work how she had hoped as this makes him laid back.

Upon returning to work, Peter doesn’t care anymore on what happens at the job. His boss Bill Lumbergh (Gary Cole) has been annoying him for years, but now he doesn’t care anymore. There are talks of downsizing and he finds out his friends Michael Bolton (David Herman) and Samir Nagheenanajar (Ajay Naidu) is getting laid off, he sets his plan into action. While things do not go according to plan, he finds a way to get Michael and Samir to steal from Initech.

‘Office Space’ is a very hilarious film and has many true to life elements about office work and being confined to cubicles each day dealing with many annoyances. With a fairly original story, the acting here is excellent. Ron Livingston isn’t the only star here, both David Herman and Ajay Naidu pull their weight very well providing some hilarious moments throughout the film. Then add Jennifer Aniston (Joanna) as Peter’s new love interest, Diedrich Bader as Lawrence the next door neighbor, and Stephen Root as Milton whom was laid off five years ago yet still receive a paycheck from Initech due to computer glitch. This isn’t just about office life, we also see how disgruntled Joanna is working at her job as a waitress having to wear 37 pieces of ‘Flair’ which she doesn’t agree with..
Movie Content: 4.5/5

The print is presented in 1080p/AVC MPEG-4 with a 1.85:1 aspect ratio. ‘Office Space’ has been released twice on DVD, with the second release providing an anamorphic widescreen presentation. On Blu-ray, the film looks really good when compared to the previous DVD releases. Colors are strong throughout, but do lack pop providing a softer looking image. Black levels are solid. The print provides a decent amount of detail even though there is a lack in a strong color palette. There is some subtle film grain in the print which never hinders the print. The print is pristine with no white specs or print damage. I was overly satisfied with the print when compared to the DVD versions which were marred with some issues.
Print Quality: 4/5

Audio is presented in DTS-HD MA lossless 5.1 mix. This is not an audio mix that you will go in expecting huge things from the soundfield as it is primarily a dialogue driven film. The dialogue is clean and clear through the center channel with no apparent issues. The rears do get some usage during times when sound effects are present or the soundtrack is blaring. The soundtrack is comprised of hip-hop songs, which is not my style of music, but I enjoy the songs used here in the film.
Audio Quality: 4/5 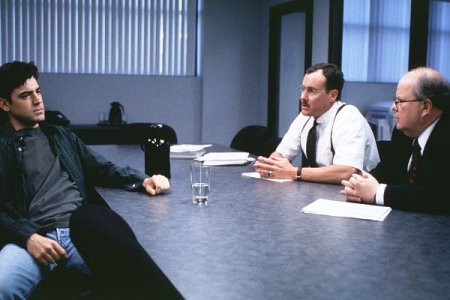 This is one area where some studios really need to take advantage of the high definition format by offering extras in 1080p. All special features are presented in standard definition for this release.
Special Features: 4.5/5

I was very happy to see that one of my all-time favorite comedies has made it on Blu-ray this early in its lifespan. Writer/Director Mike Judge originally came up with the idea about this movie based off of an animated short in the early 90’s. The audio and video is fairly good for a catalogue title which should be an incentive enough for those to upgrade to the Blu-ray release. I highly recommend ‘Office Space’ as a purchase, but those uncertain rent this first.
Overall Rating: 4/5