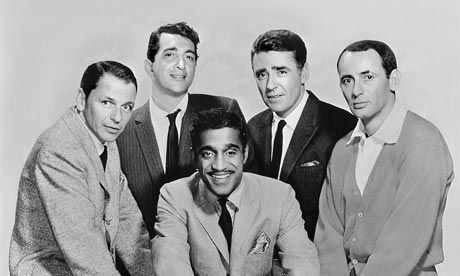 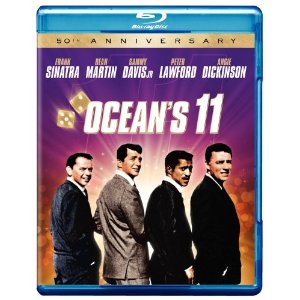 “Ocean’s 11”, produced in 1960, was the first of a series of films starring members of the Rat Pack (Frank Sinatra, Dean Martin, Sammy David Jr., Peter Lawford, and Joey Bishop at the time. Lawford and Bishop would kicked out by Sinatra later on) for Warner Brothers and this movie was far and away the most popular of the bunch. Many of the actors who hung out with Pack like Shirley McLaine would find themselves in various cameo roles in this film. Though Sinatra was looking for a film script that he and his pals could do together, it was Peter Lawford who found the book “Ocean’s 11” and the rest is history.

Although the DVD cover calls this movie a heist caper, the script must rank as the most easygoing heist even presented on screen. The title character, ex-paratrooper Danny Ocean, who is played by Sinatra, calls together ten members of his old unit to plan and execute a multi-million dollar robbery of five Las Vegas Strip casinos and much of the beginning of the film is spent gathering up the team, spending time with a few of them to see why they decide to join in and spending time watching Danny tangle with the women in his life and the boys tormenting their underworld backer. The planned heist appears to be foolproof and remarkably easy as long as everyone does his job. Naturally since this is 1960 and the bad guys still can’t really win, a few twists in the plot are thrown in.

Surprisely, Sinatra does not give a very good performance in the film, especially when compared to his earlier work. Of the rat packers, only Peter Lawford gives a solid performance throughout. Even Dean Martin, with his relaxed style of acting, slums it on occasion. It is the other actors like Akim Tamiroff, Patrice Wymore, George Raft, and Cesar Romero who give the best performances. In fact, Cesar Romero almost steals the show as the (almost) retired gangster Duke Santos who might just crash the boys’ New Year’s Eve party. It is surprising that some of the best scenes in the movie are ones without the nominal stars.

The main problem with this edition of “Ocean’s 11” is that it suffers from an identity crisis. You suspect it was intented to be a comedy, or a suspense, or maybe even a morality play but the script cannot make up mind through most of the film. It is perhaps best to describe it an excuse for a group of people to make a movie and have a good time doing it and hopefully the film audience will join in the fun.
Movie Content: 7.5/10

The print is presented in 1080p/VC-1 with a 2.40:1 aspect ratio. Warner has been doing a great job with their classics on high definition as they churn out yet another winner. Colors are visually appealing providing an eye catching image for a 50 year old film.  There are times throughout the transfer where the image does have a softness. Fleshtones look natural except for a few scenes with the makeup use in this era jump out in high definition. Black levels have a nice depth. All this comes together for some very nice details that caught me off guard. The print has been cleaned up with no apparent print damage which is impressive. Albeit a few minor issues, this is a fantastic looking print for a film of this age.
Video Quality: 9/10

The audio mix is presented in DTS-HD Master Audio Mono mix lossless track. While some may wonder why didn’t they include a TrueHD 5.1 or Dolby Digital 5.1 mix, Warner did also restore the audio in its mono format. This is something that will for sure please purists. This is a film that will not rock the house from an audio standpoint that won’t take advantage of the soundfield. Dialogue comes through the center rather clean and crisp.
Audio Quality: 9/10

If you like your crime films to have lots of suspense, action and explosions, “Ocean’s 11” is not the film to see. If you like to see a time capsule of a bygone era whose likes we will not see again, this film may work for you.
Overall Rating: 8/10