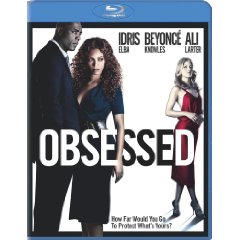 Derek Charles (Idris Elba), a successful asset manager who has just received a huge promotion, is blissfully happy in his career and in his marriage to the beautiful Sharon (Beyoncé Knowles). But when Lisa (Ali Larter), a temp worker, starts  stalking Derek, all the things he’s worked so hard for are placed in jeopardy.

On the movie, the camera shows her in close up more than the other characters. Her husband played excellently by Idris Elba has a small head, and when the camera pans across her to see him his head looks even smaller. In addition we seem to see more zoomed in shots of Beyonce. Sexy hot new temp Lisa (Ali Larter) gets it bad for happily married exec Derek. Wife Sharon (Beyonce) goes on hyper alert. “Is she pretty?” she asks. “Pretty plain,” he says. Oh oh.

As you probably can imagine the innocent relationship takes a turn, as Lisa pursues Derek. There is nothing she won’t do to get what she wants, and the situation spirals out of control in unexpected ways. Will Derek give in to temptation or tell his wife what’s going on? Obsessed delivers solid entertainment, and the fight scene between between Beyonce and Ali Larter is one of the best girl fights you’ll see. “You think you’re crazy? You ain’t seen crazy, bitch!”.
Movie Quality: 8.5/10

The audio is presented in Dolby TrueHD 5.1 mix. This is not an audio mix that you will go in expecting huge things from the soundfield as it is primarily a dialogue driven film. Dialogue was on the lower side for this one which was surprising. Sony has been doing great of late on Blu releases, but not too sure what happened with the audio mix.
Audio Quality: 8.5/10

‘Obsessed’ is this generation’s ‘Fatal Attraction’. I enjoyed this film quite a bit albeit some of the story’s flaws, but this is not a film that will get a lot of replay value. On Blu-ray the video and audio are lacking a bit which is unusual from Sony. If you are a fan of the film you will not be disappointed.
Overall Rating: 8.5/10