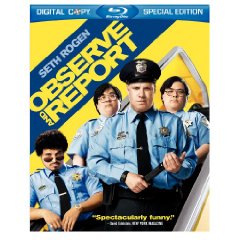 With sublime awkwardness, Seth Rogen throws himself into the role of a deluded, socially inept shopping mall security guard. Ronnie Barnhardt (Rogen) protects his little kingdom with a mixture of grandiose passion and borderline incompetence; he can’t catch a flasher in the parking lot or a thief with inside connections because his prejudices and desires cloud his ability to see what’s right in front of him–all he can see is the trashy cosmetics salesgirl Brandi (Anna Faris) who thinks he’s nothing but a creep. Though he resents the intrusion of a police detective (Ray Liotta), Ronnie decides to pursue his true dream: Becoming a cop so he can carry a gun. The plot isn’t what matters in Observe and Report–this comedy is about letting talented actors create strange characters with enough roots in reality to make them very, very funny. Even the supporting actors shine with a mixture of weirdness and banality, including Michael Peña (Crash) as Ronnie’s sidekick who turns out to have a secret life, and Celia Weston (Junebug) as Ronnie’s boozing and wildly inappropriate mother. Writer/director Jody Hill (The Fist Foot Way) has a gift for pushing an ordinary moment into comic exaggeration, though he doesn’t always find the right balance; every now and then Observe and Report veers into territory that’s funny, but undercuts the movie’s internal reality, and there are several moments of unexpectedly graphic violence that will make some viewers recoil. But when the movie hits the mark–and it does so more often than not–Hill and Rogen tap into a rich vein of humor that stands apart from the usual Hollywood formula gags.

Ronnie Barnhardt (Rogen) is a security guard in the local mall. He has four subordinates: Dennis (Pena), the Yuen twins (Yuan and Yuan), and Charles (Plemons). They all look up to him, and he runs things like it is the most important job that ever existed. Ronnie himself has a thing for Brandi (Faris), who works in cosmetics, but she doesn’t return his affections. Nell (Wolfe), another mall employee likes him, but she is too plain for him to notice. Then tow things happen to rock Ronnie’s world: a flasher begins terrorizing customers and employees, and a string on robberies. Despite the police becoming involved, Ronnie sees this as his problem, and takes things into his own hands.

“Observe and Report” is a surprising film. It is not your typical Seth Rogan comedy. In fact, its darker undertones are reminiscent of Adam Sandler’s “Punch Drunk Love”. This alone will be polarizing for people looking for something like “Knocked Up”. Rogan does well, stretching his acting chops as Ronnie, a seriously flawed individual. There are a lot of laughs, but there is an awful amount of uncomfortable moments as well. Director Jody Hill even manager to push the limits of male nudity to humorous and uncomfortable effect. “Observe and Report” is a better movie than I initially thought walking out of the theater, but it is definitely not for everyone. See at your own risk!

“Observe and Report” is very good. It is not a comedy that will make you roll in the aisle, but it creates an interesting atmosphere for an oddball group of characters that will make you laugh and smile and flinch at the violence.
Movie Quality: 9/10

The print is presented in 1080p/VC-1 with a 2.35:1 aspect ratio. The film has a definite dated look, slightly flat and the images are a little grainy, like Hill is trying to evoke the type of films made in the Seventies. This, and the film’s setting in a dated mall, gives the project a slightly retro look, making us believe it might have been made before the advent of high def. This ends up hurting the picture quality to a degree as it very soft throughout the entire presentation. Grain is present, but not consistent as it can be on the higher side in some scenes. Fleshtones are accurate looking. Black levels are also very strong.
Video Quality: 8/10

The audio is presented in Dolby TrueHD 5.1 mix. ‘Observe and Report’ is a dialogue driven comedy with action spread throughout the film. Dialogue is clean through the center channel and well balanced. The soundfield takes advantage of the car chases and action scenes. From gunshots and fist a cuffs the audio is engaging. It brings the action to life with a lot of activity from special effects and the soundtrack.
Audio Quality: 8.5/10

This Blu-ray edition has a decent amount extras with the PIP Audio Commentary being the best of the bunch here. My only complaint is that we need more special features to be in high definition than in standard definition for Blu-ray releases.
Special Features: 6/10

‘Observe and Report’ is a zany comedy that fits Seth Rogan very well as the lead actor and things come together very well with a good cast. While this may not be the greatest comedy, it is one of the better ones that I have seen this year. The story could be out there for some, but I did get plenty of laughs from this film and enjoyed it from start to finish. On Blu-ray the video is a bit underwhelming with fitting audio for a comedy. I highly recommend this to those that are fans of Seth Rogan and are looking for a comedy they could sit back and enjoy. Beware, there are some frontal male nudity shots in this film so I would keep the young ones away from this one.
Overall Rating: 8/10