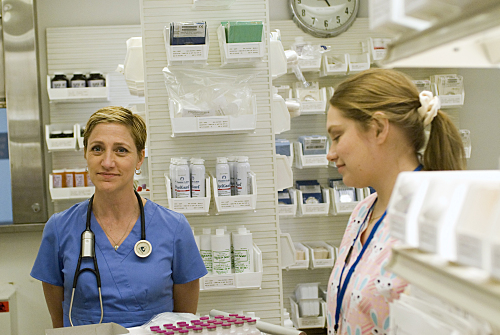 Edie Falco stars as title character Jackie Peyton, a drug-addicted emergency room nurse in a New York City hospital. For Jackie, every day is a high-wire act of juggling patients, doctors, fellow nurses and her own indiscretions. The second season of the Showtime Original Series Nurse Jackie™ continues its look deep inside the complicated heart and soul of a functioning addict, a loving wife and mother, and a first-class nurse. 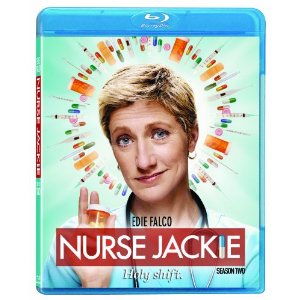 With Season 2 of “Nurse Jackie,” Jackie Peyton has officially eclipsed Nancy Botwin as the most fascinating and complex lead female character on a current cable show. Before “Weeds” started floundering, the show was about a complicated, more or less ordinary woman with both good intentions and some nasty secrets. Nurse Jackie’s character (fleshed out by Edie Falco’s superb, nuanced performance) offers all that and then some.

If the ending of Season 1 had it looking like Jackie’s drug abuse and infidelity were going to finally come out in the open, well, not so much. After all, drug addicts are slippery and manipulative people, and in the beginning of the season, Jackie is able to keep leading her double life without disastrous consequences. But as the Season goes on, and Jackie’s actions become more and more desperate and reckless, it looks like at least a few of the people around her are, at the very least, onto her.

While Jackie’s storyline keep progressing, Season Two did a very good job of making all of the supporting characters much more interesting and fleshed-out. Miss Acolytes, a wasted character in the first season, comes into her own as the hospital’s thick-skinned, yet good- hearted, administrator. Nurse MoMo’s role as token gay and male nurse has been replaced by two much more interesting characters: Teddy Bear-ish Thor and recovering addict Sam. Idealistic Zoë continues to grow professionally, and her romance with a sweet paramedic is probably the most endearing pairing on the show. And Dr. Cooper continues to flail about in his narcissistic, yet strangely endearing, way.

The characters closest to Jackie, husband Kevin, BFF Dr. O’Hara, and lover Eddie, all go down darker and more complicated roads this season. The cracks in Kevin and Jackie’s marriage start showing dramatically, and Kevin starts to reveal he’s not the doormat he seemed to be in the first season. Eddie’s obsession with Jackie leads him to befriend her husband, and insert himself into Jackie’s life in a, frankly, creepy way. And Dr. O’Hara, the consummate professional, seems lost in her personal life, dallying with both Nurse Sam and a female journalist, all the while living in a hotel.

In addition to all the drama of the hospital staff, some of the best moments of the series belonged to the guest stars playing patients and family. Although the focus of the series is usually the personal lives of Jackie and those closest to her, the show often works best when it takes time to focus on the kinds of situations intrinsic to working in a hospital ER. Jackie’s strong, efficient, and compassionate handling of patients reminds the audience why, despite her many flaws and secrets; she’s still a woman worth spending time with.
Movie Content: 10/10

The print is presented in 1080p/MPEG-4 with a 1.85:1 aspect ratio. I found the second season of Nurse Jackie to have improved video quality over the previous season on Blu-ray. Here in Season 2, it is better managed to the point where it is almost non existent and you have to really look for it. Colors are bright and vibrant providing washed out colors in certain scenes. Blacks are deep. Fleshtones are accurate and natural. Details are excellent, providing even some of the minute details on screen.
Video Quality: 9/10

The audio mix is presented in DTS HD 5.1 Master Audio lossless track. ‘Nurse Jackie’ is a dialogue heavy television show and it really shows with how well the audio is placed through the center channel. Dialogue is clean and clear providing some excellent depth. For a television show, I was rather impressed with how clear the audio is. This is a more front heavy presentation as the rears do not get much of a workout.
Audio Quality: 9/10

I am looking forward to season three and Edie Falco is a wonderful actress who may well walk away with an Emmy this year. Overall, Season 2 was fantastic, and the finale was pretty climactic, so I’m very excited for Season 3.
Overall Rating: 9/10