No Way Back Blu-ray Review 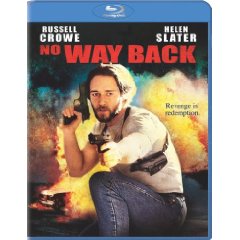 The FBI, the Mafia, and the Yakuza (Japanese gangsters) fight to the death in this nonstop action thriller starring Russell Crowe (Gladiator). FBI agent Zack Grant (Crowe) sends beautiful rookie operative Seiko (Kelly Hu) on a sting operation against the depraved, skinhead son of a Mafia kingpin. Little does he know that Seiko is on a revenge mission of her own. This bloody situation escalates into all-out war, as the Mafia kingpin, Frank Serlano (Michael Lerner), and the head Yakuza, Yuji (Etsushi Toyokawa), get into the act. Grant is forced to go renegade from the bureau when Serlano kidnaps his young son, a plot point that certainly raises the story’s emotional stakes. During an exciting airplane hijacking sequence, we meet Mary (Helen Slater), a dizzy blonde flight attendant who introduces an unexpected note of comic relief to the proceedings (along with a touch of romance). Crowe is convincing in Dirty Harry mode, bringing his characteristic intensity and empathy to the role. It’s fun to watch a former Miss Hawaii, Kelly Hu, display her martial arts mastery, and the performances of Slater and Toyokawa are a cut above the action-genre norm. Still and all, No Way Back falls squarely into the “guilty pleasure” movie category. Writer-director Frank A. Cappello (American Yakuza), provides plenty of slam-bang, shoot-’em-up action, plus enough nail-biting suspense to keep you on the edge of your seat.

Crowe displays his developing skills as an action hero, giving us a glimpse of what got him an Oscar in “Gladiator”. As an renegade-style FBI agent, he takes us on a hot pursuit where he’ll risk anything. Helen Slater (City Slickers) provides some terrific comic relief. There’s plenty of action and fun making this film a great watch. It’s a must have for collectors of Russel Crowe movies and worth your money for action viewers.

This Russell Crowe film is one of his least known works. One should realize it is not in the same caliber as his other great films, but one that should be appreciated as strictly an action hero performance instead. “No Way Out” was not a theatrical release, instead it debuted on cable televison. It has the typical elements of a made for t.v. movie fare; weak script and storyline, minimal character development, and strictly action-driven. However, Russell Crowe turns this film around from your typical action genre movie to a well-paced and well-acted film on his part. This is the first role of Crowe’s where he plays a father and a widower. It is ashame there was not enough of an established relationship between father and son. However, it was so adorable to see the character of Zack Grant talk to his son as if an adult and have his son call him by his first name. I believe you will be pleasantly surprised by this different kind of film, character, and performance by Russell Crowe in his fourth U.S. film. You will notice how far he has come in his present film career!
Movie Content: 8/10

The print is presented in 1080p/AVC MPEG-4 with a 1.85:1 aspect ratio. I found colors to be a bit more vibrant than the DVD, but there was still that softer color palette which almost looks like a film filter. While this film does not have the prettiest looking transfer, for fans of the film it will be enough to make them happy. There is a significant amount of film grain which can get heavy at times. Flesh tones are accurate looking.
Video Quality: 7/10

The audio is presented in Dolby TrueHD 5.1 mix. The audio is not up to par with recent Sony catalogue releases which is a rather disappointment. I found the audio to be very muffled sounding with a bit of distortion. This was worse during any scenes with dialogue. This is more of a front heavy presentation and not much audio is peering through the rears. This is disappointing considering that this is an action film.
Audio Quality: 5/10

The film contains no special features at all.

‘No Way Back’ is actually a decent movie which shows the raw talents of Russell Crowe in his early career. Fans of the film will not be disappointed one bit by the film, but on Blu-ray they might be disappointed by the subpar video and audio.
Overall Rating: 6/10