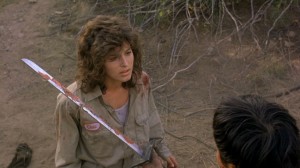 Aerobic instructor Christie Ryder (Lucinda Dickey, Breakin’, Breakin’ 2: Electric Boogaloo) becomes possessed by the spirit of an evil ninja when she comes to his aid after he was shot down. Dominated by the killer’s vicious and relentless rage, she sets out to brutally attack his enemies. Her boyfriend, confused by Christie’s changing personality and afraid that he might be her next victim, enlists the help of Yamada (Shô Kosugi, Enter the Ninja, Revenge of the Ninja). In a life-threatening exorcism and ultimate fight to the death, Yamada proves that he is Christie’s only chance for survival. 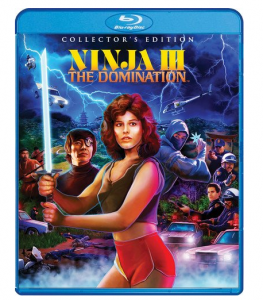 ‘Ninja III: The Domination’ is energetic, sometimes priceless popcorn fodder from those reliable folk at the Cannon Group, producers and distributors of so many irresistible B movies of the 1980s. An in-name-only sequel to “Enter the Ninja” and “Revenge of the Ninja” (all the three movies really have in common is star Sho Kosugi) with its own stand alone story, it functions as a martial arts / “Exorcist” mash-up as an evil “black ninja” assassin (David Chung) slaughters some people on a golf course and then leads the police on a chase. Eventually, he’s pumped full of bullets, but he has enough life left in him to stumble his way to a young woman, Christie (Lucinda Dickey of the “Breakin'” movies) and then transfer his spirit to her body. He then periodically takes control of her in order to avenge himself on the cops who shot him, while a good ninja (Mr. Kosugi) is sent from Japan to take care of the situation.

Director Sam Firstenberg, a regular in Cannon Group productions (his other credits including “American Ninja” and “Avenging Force”), really seems to be having fun with the melding of genres here, and this movie sizes up as *very* cheesy and *very* funny entertainment that scarcely takes a breath. Its opening 17 minutes surely has to rank as one of the best ever openings for a cult film. There’s plenty of action to enjoy; Dickey looks great in and out of ninja costume even if she is doubled by stunt men for the majority of the action sequences. Mr. Kosugi is in extremely fine form, especially for the final showdown with the black ninja at the movies’ conclusion. Jordan Bennett, as a cop who becomes Christies’ love interest, is annoying for a while but he does eventually grow on you. Also among the cast is the incredibly prolific and always wonderful character actor James Hong, playing a Japanese spiritualist. The horror parts of this movie are never exactly scary, but that’s part of the clunky charm of this thing, which does feature one of the oddest bits of product placement ever seen in cinema.
Movie Quality: 9/10

The print is presented in 1080p/AVC MPEG-4 with a 1.85:1 aspect ratio. I reviewed the previous Shout release 5 years ago, yes, that many years have passed since I reviewed the original Blu-ray release. At the time of the initial Shout release the Blu-ray was a marginal upgrade over the DVD release. The image was a decent surprise albeit a few small issues on the original release. Shout touts a new 2K remaster here with this latest release. Almost 5 years later after my original review, one of my biggest issues was the grain structure in the original release. While it is still there here with this new release, it is not as obtrusive and looks like it belongs as a part of the film this time. While we are at it, the color palette is much more vivid looking. My initial concern was that with how vivid the image would look that there has to be a drawback somewhere, but Shout made the image a bit darker to compensate and only does the image much more justice. This is a definite upgrade over the previous release, so if you are a fan of this franchise or this film alone I highly recommend it.
Video Quality: 9/10

The audio is presented in DTS-HD MA lossless 2.0 mix. The audio mix is an upgrade from the previous release even though it is at a 2.0 mix. Audio is another story with this release and is bar none impressive. MGM went out of their way to make this audio mix sound immersive for a catalog title. What makes this mix impressive, is that effects were dynamically brought out into the entire soundfield. The sword fights in the film are impressive as you hear the steel of the blades cling against each other during the sword fights. You will not be disappointed.
Audio Quality: 9/10

This is solid no-brainer escapism. If you’re ready to just kick back and put your brain in neutral, the laughs and thrills are enough to keep you satisfied for 92 straight minutes.
Overall Rating: 9/10

« The Terror: The Complete First Season comes to Blu-ray™ and DVD on August 21 from Lionsgate!!!!!
Freak Show Blu-ray Review »