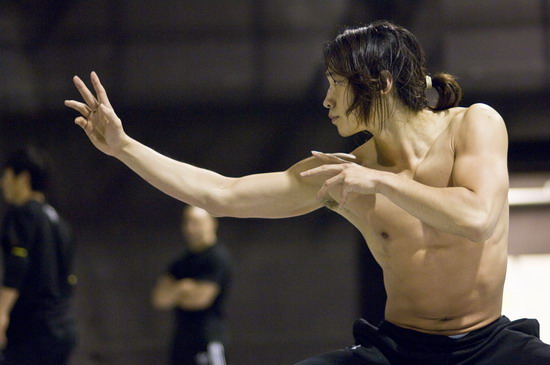 The entertaining, adrenaline-packed Ninja Assassin wastes no time cutting quite literally to the guts and gore of the mysterious world of ninja warriors–the blood flows as freely as champagne on New Year’s Eve. Only 3-D might have made it even better. Taken from the streets as a child, the orphan Raizo (Korean pop artist Rain, in his first leading role) is molded into a deadly assassin through methods that might make even the strong of stomach wince. The story flows from present-day Berlin to Raizo’s brutal training by the Ozunu, one of the mythical Nine Clans that perform political assassinations around the world. Refusal to follow an order by the clan leader forces Raizo into a life on the run. When Mika (Naomie Harris), a Europol researcher, gets too close to the truth, Raizo risks detection by his former clan-mates to protect her, and to exact his revenge. Fans of ninja films will rejoice in the classic story, while action aficionados will find plenty of heart-pounding thrills in every fight scene. Admittedly, the plot, especially Europol’s interest in the mythical clans, exists merely to move the story from one fight scene to the next. But who cares when the action shots–especially the literal firefight at the end–are so exciting. 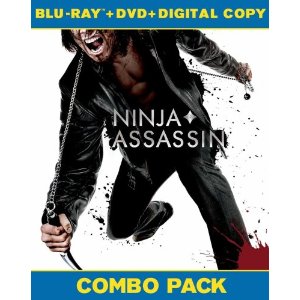 This was an absolutely joyously spent 90 minutes of updated 80’s popcorn ninja movies, with a very charismatic lead actor and a great performance by 80’s ninja cinema, Sho Kosugi, who starred in such films as; Revenge of the Ninja, and Enter the Ninja, among others. Sure the scenes were highly unrealistic, but so what! Suspend disbelief for 90 minutes and just sit back and have a great time.

The opening scene of the movie is quite intriguing and really draws you into the spirit of the film with our heroes first victim. Very original and quite stunning in its delivery and ranks right up there with the best in horror movie victims.

Is the acting Oscar worthy? Is the plot well thought out? Are the fight scenes realistic? Well, the answer to all those questions and more is a resounding, NO! However, this movie is simply great fun to watch along the lines of Shoot ‘Em Up starring Clive Owen and Paul Giamatti (I am fairly certain that I spelled that wrong). This movie is fairly fast paced and I especially enjoyed the flashback sequences where our hero reflects back upon his training as a boy and a young man and the friendship that develops between him and a fellow ninja in training.

This movie is quite bloody and that is reminiscent of the old “Kung Fu Theatre” movies of the 70’s and 80’s and their liberal use of copious amounts of bright red blood to along with every slice and dice throughout the movie.
Movie Content: 9/10

The print is presented in 1080p/VC-1 with a 2.40:1 aspect ratio. The print looks very good throughout, yet there are a few inconsistencies. Colors are vibrant and carry pop which brings out the fine details. The detailed scenes during the action sequences are very good; considering you can see Dalip’s goatee stubble on his face during the parachute sequence. There are a few scenes lack focus with the camera, causing a loss of detail. There is a hint of grain in the print, but it is more apparent in the first darker scenes of the film. Blacks are deep in the darker scenes, yet the lighting could have been a bit better to make things more apparent.
Video Quality: 8.5/10

The audio is presented in DTS-HD MA lossless 5.1 mix.his is a very immersive soundtrack during the action sequences. This is a film where there are a lot of action and chase sequences. Those looking for an audio mix that will take advantage of your equipment, this is the film for you. This is a very well done audio presentation that has dynamic range with the sound effects and a lot of panning from speaker to speaker. Dialogue is clean and crisp through the center channel, but there is a small issue that the volume of the dialogue is a bit on the lower side. I had to raise the volume a few times during the dialogue scenes. Other wise this is a demo experience with the audio.
Audio Quality: 9.5/5

“Ninja Assassin” is a fun action movie to watch. Despite its flaws, I enjoyed the way the fights were spaced out and if one is looking for balls-to-walls action then this film will not disappoint. Sometimes, we need a fun martial arts film and “Ninja Assassin” may just fulfill the needs of the action junkie. The CGI blood effects may prove to be a tad excessive at times, that I was a little turned off but I managed to look past it because the screenplay does manage to make Raizo an interesting character.
Overall Rating: 8.5/10