Posted in DVD Reviews by George Theofanopoulos on 10 May 2010 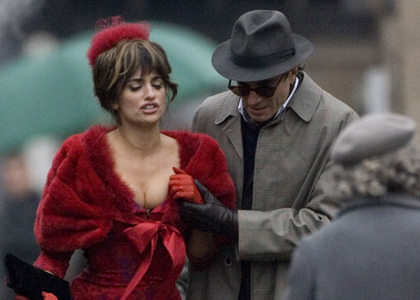 “Be Italian!” comes the thundering command from one of the catchiest songs in Nine, and the movie version of this Broadway musical hit is undeniably solid on that point. It’s drenched in cool cars, glamorous Italian threads, and cozy Roman neighborhoods, all circa 1962. That, you will note, is the vintage of Federico Fellini’s classic film 8 ½, the source for both the stage show and Rob Marshall’s frantic musical picture. As in the Fellini, the story revolves around film director Guido Contini, a glamorous public genius who’s expected to begin shooting his expensive new movie in a few days. The only problem is, the maestro has no idea what his next film will be about, and he spirals through a week of mistresses, cigarettes, and robust fantasy as he avoids the subject. Marshall’s approach to musicalizing this massive case of writer’s block is to shunt the songs off into the giant studio where the sets for Guido’s new movie have been built; the idea, presumably, is to frame them so the audience isn’t perturbed by the old-movie convention of characters breaking into song in the middle of a scene. Fair enough, maybe, but did the numbers themselves have to be so aggressively vulgar? All of Guido’s women have their turn to vocalize (and invariably writhe around in slutty underwear): Marion Cotillard plays his faultless wife, Penélope Cruz a hot-tempered mistress, Nicole Kidman his elegant star, Kate Hudson a horny journalist, Black Eyed Peas member Fergie the voluptuous beachside prostitute of Guido’s childhood. And that’s not the end of Guido’s feminine carousel; Judi Dench plays his loyal costumer, and Sophia Loren lends her iconic stature to the role of Guido’s mother. 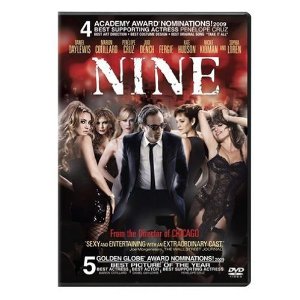 Daniel Day Lewis stars as Guido Contini, an Italian film maker who is being rushed into his latest project. Dazed and confused, Guido has no script and no idea what his film will be about. But this doesn’t stop the producer from touting the making of the new film to the press and the crew preparing for Guido’s next masterpiece.

The problem is that Guido has no idea what to do next and has yet to reveal this to the crew or the cast. As he is frantically rushed from one place to the next, he escapes and heads off to a secluded retreat where he calls in his mistress, Carla (Penelope Cruz). But even Carla doesn’t have the ability to crash his writer’s block. Before he has a chance to even attempt it, the producer and his crew show up at his hotel and begin work there on the same film…which he doesn’t have.

Things get more complicated when his wife Luisa (Marion Cotillard) arrives. When she sees his mistress in the hotel restaurant, she heads for her room, crushed that Guido and his womanizing ways haven’t changed after their years together. Guido may enjoy time spent with his mistress, but in his own way he loves his wife. It is the women in Guido’s life that have influenced him the most, from the town tramp when he was a child to his mother to his wife.

Confused and not sure where his life is going, Guido seeks out any truth he can find. He talks to a monsignor at the church, his friend and favorite costume designer Lilli (Judi Dench) and even the spirit of his deceased mother (Sophia Loren). But in the end, Guido must come to grips with the reality that he is hollow when it comes to true love. And in making this journey of self discovery, Guido finds the inspiration for his next film. The only problem is the pain he has caused himself and others to find his solution.

Fellini based “8 ½ “on his own life. The story of the making of the film falls directly into what happens here as well as that film. He did find himself unable to make a new film, to find the right story. And in realizing this, he found the story that he may be best remembered for.

But the musical film here lacks the panache of a Fellini film. It covers the surface of his views on women between garter belts and bustiers dressed on overly endowed (or uplifted) females. But there was so much more to Fellini than this. And until the last 25 minutes or so of the film, this never seems to come out.
Special Features: 5/10

While watching this movie I found the dreaded kiss of death in my hand. I constantly checked the timer to see just how much more of the movie there was to go. With the exception of the last 25 minutes, I found little to enjoy here.
Overall Rating: 5/10