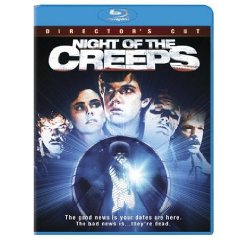 In this campy chiller, a college couple, in 1959, see an object plummet to Earth like a meteor. The boy accidentally swallows a space-slug that shoots out. In 1986, two freshmen roam the campus and stumble across the corpse of the boy who swallowed the space-slug. Once thawed out, the corpse comes to life.

It all starts out with a beautiful black & white prologue at Corman (nudge nudge) University in 1959. Some “creeps” (disgusting little things) come to Earth and attack a young man (they get in through your mouth, turn you into a zombie and plant other “creepers” that shot out of the mouth to infect people). He is caught and frozen solid and (for some reason) kept at the university. Then, in 1986, two friends Chris Romero (nudge, nudge)(Jason Lively) and J.C. (Steve Marshall) unwittingly revive him. He wakes up and attacks the university. Soon, it’s overrun by the things–it’s up Chris, J.C., Cynthia Cronenberg (nudge nudge) and Detective Cameron (nudge nudge) to battle them.

As you can see this movie doesn’t take itself seriously for one moment. Heck, there’s even a cameo from Dick Miller! And it is very funny (especially some of J.C.’s lines). But it doesn’t shy away from blood and gore–there’s plenty of that. And it is creepy. As 83 minutes it doesn’t overstay it’s welcome and ends with an all out massacre. There are some gaps in the plot (things happen way too quickly and characters just automatically correctly guess what’s going on) but this is a small quibble.
Movie Quality: 9/10

The print is presented in 1080p/AVC MPEG-4 with a 1.85:1 aspect ratio. The print is one of the better ones that I have seen for an older film. Colors are vivid and bright providing a nicely saturated presentation. Blacks are solid throughout the print. Flesh tones are natural looking with no enhancement. Details look very good in this film. Fans of the film will not be upset and more than satisfied with this release.
Video Quality: 8/10

The audio is presented in DTS-HD MA lossless 5.1 mix. Dialogue is very clean and crisp through the center channel. We have more of a front heavy experience with the mix as dialogue also tends to pan between the front speakers. When the rears get are in use, you hear a few sound effects and the score.
Audio Quality: 8/10

So if you are looking for a fun film and love other zombie movies like Re-Animator then this film is right up your alley. It took this long to finally get this film on home video and I recommend not just walking to buy this, you should run to your local store to get this.
Overall Rating: 8/10