Night At The Museum: Battle of Smithsonian Blu-ray Review 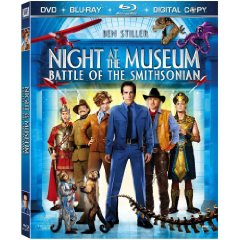 Ben Stiller wrestles with extinct beasts, historical figures, and meddling monkeys in Night at the Museum: Battle of the Smithsonian, the sequel to the popular 2006 special-effects extravaganza. This time, the ancient Egyptian tablet (the one that brings all the exhibits at New York’s Museum of Natural History to life at night) is being shipped off to the Smithsonian in Washington, D.C.–which, as the movie diligently tells us, is the largest museum in the world. Naturally, former museum guard Larry Daley (Ben Stiller) heads down to rescue it (and, by extension, keep his magical museum friends alive). He ends up fighting with a nasty pharaoh who talks like Boris Karloff (Hank Azaria, The Simpsons) and falling in love with Amelia Earhart (Amy Adams, Enchanted). All the old gang are along for the ride, including Dexter the monkey; much face-slapping and special effects ensue. There aren’t many surprises, but Battle of the Smithsonian is cheerful enough to entertain everyone who enjoyed the first movie. Extras include commentaries by the director and the writers, the usual self-congratulatory making-of featurette, deleted scenes that are actually as good as the rest of the movie, an alternate ending, and an entirely pointless second disc about Crystal, the capuchin monkey who plays Dexter (the monkey disc has less than a half-hour of material, including two mediocre games). The great supporting cast from the first movie returns, including Owen Wilson, Steve Coogan, and Robin Williams.

This is yet another family-pleasing installment in this series (Can you tell I’m hoping for more?). I thought that I preferred the first one to this one, but after watching this again, it sure does stand up. I think that it has even more laughs than the first. Hank Azaria is absolutely fantastic as Kahmunrah (sp?), and there’s a battle of the night guards scene between Ben Stiller and Jonah Hill that is not to be missed.

I think that the first one has a bit more heart, but you can count on at least as many laughs with the Battle of the Smithsonian. Another thing that I liked about it was a bit more of a historical focus. I felt like I learned more about the characters from this particular movie, including Amelia Earhart, the Tuskeegee Airmen, General Custer etc. This is a great movie for the whole family. My kids loved this movie, and it’s a great movie my whole family..

The print is presented in 1080p/AVC MPEG-4 with a 2.35:1 aspect ratio. ‘NATM 2’ is rather impressive on Blu-ray offering a demo worthy image. If you viewed the original on Blu-ray, you will instantly notice how natural this entire film looks. I was amazed at the color range as it was deep and vivid really popping out off the screen. I found reds, blues, and yellows to really shine with this print. Blacks are deep. I did find contrast to be a bit too hot than what I expected. The contrast affected a few scenes for me. Details are excellent throughout as this is a pristine image with no apparent issues. The original film was way too over processed in the cutting room floor, ‘NATM 2’ is not as we also have a nice fine thin layer of grain present throughout the entire presentation. So grain haters may not be too happy here, but it never hinders the image.
Video Quality: 9.5/10

The audio is presented in DTS-HD MA lossless 5.1 mix. The audio presentation for ‘NATM 2’ is a very immersible experience. Like the first film, I felt like I was right in the middle of the action at all times. Between this film, ‘Fight Club’, and ‘Terminator: Salvation’, this past week alone I feel like I was sucked into each fictional world as I was viewing these films. There are a ton of panning and dynamic effects brought into the soundfield which will captivate the viewer. If I did have one complaint is that the rears don’t have enough discreet effects coming through. It is odd to have a film of this nature take advantage of the big action sequences, yet the smaller discreet sounds is a disappointment to not come pouring through the rears.
Audio Quality: 9/10

We really enjoyed ‘Night At The Museum 2’ much more than the original. This is a film that the whole family can sit down and enjoy without having to worry about any mature themes. On Blu-ray the film has a very appealing video presentation which is near demo worthy and an excellent audio mix that misses a few small steps. This is highly recommended as a purchase on Blu-ray.
Overall Rating: 9/10