Martin Scorsese took a daring turn from the mean streets that made his reputation in the early ’70s with New York, New York, his homage to the big-band era. And what an homage it is: the dazzling production design by Boris Leven continues to impress over the film’s nearly three-hour length. And there’s no denying the anthemic appeal of Kander and Ebb’s title song, belted with winning bravado by costar Liza Minnelli in a showstopping finale. But as valiantly as Minnelli and Robert De Niro try, they can’t elevate the shaky plot beyond its two-dimensional construct. It purports to be a Star Is Born-like tragedy of colliding careers, but too often it feels like inadvertently eavesdropping on a marriage counselor’s most truculent clients. (There are times you want someone–anyone–to slap Minnelli upside the head with a copy of Women Who Love Too Much.) For diehard Minnelli (or Scorsese) fans only. 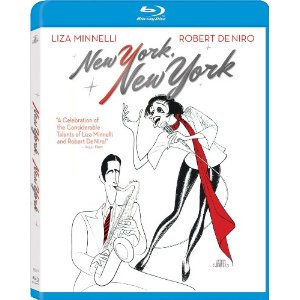 I have mixed feelings about this movie. The performances are stellar but the characters are very hard to love. The direction is sharp yet the plot if rather flimsy. The set pieces and costumes are delicious to the eye, but the film overstays its welcome by about forty minutes. The music is jazz at its finest yet the musical numbers themselves seem to be lacking for me. It is a big plate of good and bad with no real proper balance of the two.

The film stars Liza Minnelli and Robert De Niro as a struggling couple trying to make it big in `Big Band Era’ New York. Francine Evans is a dynamite singer, and Jimmy Doyle is a stubborn yet savvy sax player. Together they make one sensational act that draws quite a crowd, but when you mix personal life with business things start to grow sour. When Francine gets pregnant and leaves the tour, Jimmy finds his band diminishing under the strain of a new singer (who just can’t hold a candle to Francine) and his fizzling career sends a shock of distain through his body. When Francine, while pregnant and in New York, starts striking up conversations of record deals, Jimmy finds that jealously can corrupt and even kill a relationship.

The films plot (rocky relationship inside a jazz group) is far too hollow to sustain the films near three-hour running time. If the film had been maybe a third shorter it wouldn’t have led way to the films flaws so much. By giving us a whole lot of nothing so-to-speak you give us time to realize that `New York, New York’ doesn’t have a lot to offer.

What `New York, New York’ doesn’t have in substance it makes up for in charisma. The two stars are sensational here, both of them working off the other with ferocity. We all know that De Niro is a brilliant actor, but for me at least, I was only aware of one performance by the mighty Minnelli; ‘Cabaret’. I consider her dynamic performance one of the best in the history of cinema; but even I knew that one brilliant performance does not equal brilliant actress. As good as De Niro is, this movie is all about Liza. She is phenomenal here, completely sinking into her character’s spunk and drive; delivering chilling dramatic tension while never losing Francine’s bubbly persona and unforgettable heart. De Niro is cheeky, funny and keeps up with Minnelli rather well, but she is clearly best-in-show here.
Movie Quality: 7/10

The print is presented in 1080p/AVC MPEG-4 with a 1:85:1 aspect ratio. This is one of the latest wave of MGM releases that have had subpar video quality. I won’t say that I was overly disappointed with this print but compared to other films in this era MGM could have done more. While colors are strong and accurate looking they do appear rather soft throughout. Blacks are deep. There is a fine layer of grain. The print is not pristine as there are times where there is white speckles and a bit of dirt. Details and clarity is decent and really helps with this 1080p transfer for larger screen viewings. If you already own this on DVD, and are a fan of the film upgrading to the Blu-ray version would be recommended.
Print Quality: 7/10

The audio is presented in a DTS-HD Master Audio lossless 5.1 mix. ‘New York, New York’ receives an upgrade to DTS-HD MA 5.1, but the bump to full 5.1 isn’t a huge upgrade here. This is mainly a front heavy experience with small hints of the surrounds getting use. Dialogue is clean through the center without an issues.
Print Quality: 7/10

So, in the end I have to say that ‘New York, New York’ is a real mixed bag. The acting is great (thanks to undeniable chemistry), the look and feel of the film is flawless, but these two components can’t really save the film from the weak plot and overlong running time.
Overall Rating: 6/10