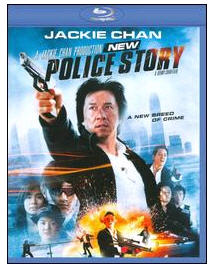 Inspector Wing of the Hong Kong Police Force has become the victim of a gang, led by the evil Joe. When his entire team is killed, Wing becomes a hapless drunk, feeling guilty for the deaths of his team. It is up to a young rookie officer to get Wing back on his feet and begin an adventure to get revenge on the evil Joe and his Gang of Five, especially when it becomes personal.

Jackie Chan takes a different direction this time around as he’s responsible for the death of his squad in a botched operation. Where he guarantees that he’ll get the criminals involved in 3 hours. Pretty egotistical on his part and it bites him in the ass hard. As they go about their operation and all of his coworkers get killed off on this supposedly easy mission.

After this we find him in a deep, deep depression drinking to the point of the passing out and not knowing his whereabouts. This goes for awhile maybe a bit too long for some tastes. It takes him getting a new “partner” and reconnecting with his girlfriend to finally get him out of this funk. By that time a good portion of the movie has been done, but its Jackie as we know it. With all the over the top stunts, great fight scenes and solid costars (even the villians) as they have a reason for the aggression and killing of police officers. As a little bit is opened up about one of them and his abusive police chief father.

I’m sure it has plently to do with the way they are. I don’t agree with it but i can see where it comes from. Overall the movie moves along at a slow clip for a good portion of the movie, but towards the 2nd half of New Police Story all the things that. We know and love about Jackie Chan films comes to light and ends on a sad somber note..
Movie Quality: 9/10

The print is presented in 1080p/AVC MPEG-4 with a 2.35:1 aspect ratio. ‘New Police Story’ in high definition is the best the film has ever looked when compared to previous DVD releases. With the latest release of catalog titles from Lionsgate, they have started doing a much better job with releases on Blu-ray. I found colors to be on the strong side with blue’s, red’s, and yellow’s sticking out the most. A good example is the explosions in the warehouse, the fire looked alive and vivid. Black levels are deep as can be seen in some of the coats and the police force’s vests as an example. I found details to be great in some scenes and a few others they were lacking. In some scenes I felt that there was too much light that throws off the image a bit, but that is a directorial decision and not a Blu-ray issue. Overall I am pretty happy with the image as a fan of this film.
Video Quality: 9/10

The audio is presented in DTS-HD MA lossless 5.1 mix and Cantonese 5.1 DTS Audio. There is a nice mix of action and dialogue with this film. I found this audio mix to be a pleasant surprise. Dialogue through the center channel is clean and crisp. I am not a fan of dubbed language tracks in foreign films since the voices always sound so scripted. That does not change here at all. During the action sequences this is a very involving and bombastic audio mix. There were a lot of panning effects in the soundfield from the rears with bullets whizzing from speaker to speaker. The soundtrack and sound effects take advantage of the rears which I did not expect. A good example is the crisp sound of glass breaking making it sound just as if the glass was breaking right in front of you. Bass management is also well done, while at times I did feel like it could have used a little bit more oomph.
Audio Quality: 9.5/10

‘New Police Story’ arrives on Blu-ray in high definition which should make fans of Jackie Chan and the Police Story films very happy. The video presentation is very good and an upgrade over the previous DVD releases. I did have a little difficulty rating the video presentation due to the details in some scenes being off and some of the lighting does affect a few scenes especially the ones in the warehouse. The English DTS-HD presentation minus the dubbing is fairly impressive for a catalog title considering that titles released from larger studios in the same time frame haven’t matched what we have in this presentation. This is highly recommend especially if you own the DVD release, it is time to upgrade.
Overall Rating: 8.5/10