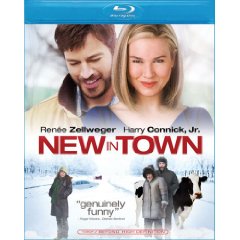 What defines success? For Miami executive Lucy Hill (Renee Zellweger), it’s climbing the corporate ladder, so when her company needs someone to automate and reconfigure a food plant in a rural town in Minnesota, Lucy volunteers figuring the temporary move will lead to a big promotion. Intent on sweeping into town, mechanizing the factory, and reducing the staff by 50 percent, Lucy has no intention of letting anyone or anything stand in her way. Disdain doesn’t begin to describe what Lucy feels about the small-town residents and their obsession with scrapbooking, propensity to bring up Jesus in casual conversation, and outdated visions of what comprises an appropriate female role model. Union leader Ted (Harry Connick Jr.), plant manager Stu (J. K. Simmons), and secretary Blanche (Siobhan Fallon) bear the brunt of Lucy’s scorn, but even as she focuses on carrying out her business agenda, Lucy inexplicably finds herself drawn to those same inhabitants. As she begins to reexamine what’s truly important in her life, personal relationships unexpectedly begin to vie with business success for a spot at the top of her priority list and she begins to consider whether or not these disparate ambitions must by necessity be mutually exclusive of one another. Reminiscent of Fargo with its satiric portrait of simple Mid-Western country folk, New in Town is an engaging film about ambition, self-discovery, and love that offers plenty of laughs, life lessons, and an opportunity for personal reflection.

Renee Zellweger is great. She is so beautiful and acts so well. She can make you laugh without making look as though she tries and she really makes you feel what her character is feeling. But after seeing this, I look forward to her next film. Harry Connick Jr. is another actor who is great. He does such a great job of being the guy is is supposed to be in this film. He never gives you the feeling of seeing someone over act. He plays his part calm and cool. For a guy who is such a good singer and actor, we sure don’t see much of him. All the actors in this movie act very well. You get the feeling that you know them, and you can understand what they’re going through.

This movie did make me laugh. But more importantly it really drew me in. It had my attention fully and totally. There are few movies that make me forget that I’m in a theater. Few that make me forget about everything else but it. This movie was one of those few. I will buy it when it comes to DVD. I look very forward to watching it again. I hope there are others whom like this much as I. Remember, even if people give something a bad or good review, it’s up to you to decide if you like it. So give it a chance.
Movie Content: 9/10

The print is presented in 1080p/AVC MPEG-4 with a 1.78:1 aspect ratio. olors are stunning with this transfer, carrying a very bold and vibrant color palette throughout. Blacks are deep helping provide a very detailed image. Fleshtones are natural and realistic.
Print Quality: 9/10

The audio is presented in DTS-HD MA lossless 5.1 mix. Dialogue through the center channel is very clean and crisp. The music on this soundtrack is what mainly pushed the audio in the soundfield. The rears would mainly get some action when music would play or the use of any effects.
Audio Quality: 8.5/10

‘New in Town’ is a truly good comedy. The interplay between Renee Zellweger and Harry Connick Jr is great. On Blu-ray the film offers good video and quality. I highly recommend this comedy.
Overall Rating: 8/10