Posted in Videogame Reviews by George Theofanopoulos on 19 June 2009 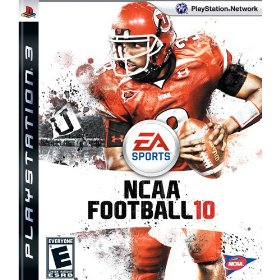 I feel like a giant yo-yo this year with regards to NCAA 10. Some times I feel good about the game and others I’m upset over what Madden is getting and NCAA isn’t. The last day before the demo came out was weird. I was feeling good until we found out the sliders were broken. Then I was extremely ticked off and swore off buying NCAA 10. Then positive impressions of the demo come in and the EA team announces a patch to fix the sliders. I feel good again. And then I play the demo.

Let me first say that it’s awful hard to get a real good impression for a football game with 2 minute quarters. It’s just too hard to get into a flow. Plus a demo is often limited to a small size and doesn’t have all the bell and whistles of a retail copy. This is clearly the case with this demo. I played two games on AA; one with OU and one with Florida and both went into double OT. It usually takes me at least 5 full games at 7 minute quarters to start to get a good feel for a new game. No way can I make real judgments on NCAA 10 based on my play time but I’m unhappy about quite a few things.

The graphics in the demo (PS3) are mediocre. I had just played a couple games of NCAA 09 before the demo and played a game afterward. The demo is a small step back in how crisp the players look. The sound is very poor. The crowd chants are awful. Where were these recorded? The band music is missing and the overall presentation is extremely blah. I have to assume this is related to demo size as ’09 was better imo. If this is how the retail version is, I won’t understand it at all.

There are a couple tackle animations that happen over, and over, and over. This was confirmed to be fixed for the retail copy but it doesn’t make the demo look that good.

Lastly, you can’t adjust the sliders in this demo. Most demos don’t allow you to do that but when I compare the demo to my adjusted ’09 copy, I preferred the ’09 version without a doubt. It’s an unfair comparison – like buying a new suit off a rack without alterations and comparing the fit to the old one hanging in the closet.

The game feels very similar to ’09. I didn’t notice a big difference in the player movement. The differences are small if any and the players still lack too much weight and momentum. I can understand why many reviewers said the game feels just like ’09. It’s because it does! The subtle AI difference might be there but the feel is still similar.

I’ll start with this short list. Again, very limited playtime but I did like the fact the cpu QB went deep. So nice to see. Over the shoulder grabs looked really good too. The corner routes may be a bit too easy to complete but the return of the deep ball on both sides was nice to see.

I’ve missed the r-stick DL moves since ’06. Barely used it tonight but I’ll just include this as I know I will like it once I get more playing time with it.

I don’t like the new camera. As soon as I started playing I hated it and this was one of my biggest annoyances while playing initially. As time went on I adjusted but I don’t like it. Plus it seems to pan and zoom during play a little more than I like and the transition doesn’t always seem so smooth. Why couldn’t the NCAA team add the old camera as another option? At least they could say they offered two camera angles. It does pan out a bit more to see the flats but the camera angle is too low imo. I like a higher view. I do think I will adjust but I think this is a step backwards.

I really loved the idea of the player lock camera when I first read about it. I thought this would be great on defence but I didn’t like this either. The camera is constantly panning around and moving making it very hard to either control your player properly and/or see the play well. I actually think its best if you are a DB but if the play is away from you, you can’t see anything. I would much rather prefer a fixed, defensive third person camera at this point.

Not much from either running game. Still early but without sliders, hard to tell if the cpu will be able to run effectively this year. This is so hard to tell though because of the 2 minute quarters. Both teams are in hurry up most of the game. The running animations are still poor.

Shorter, bullet passes seem too fast. Not a big deal but I did notice it.

Not much of a pass rush on the cpu QB but I didn’t really have a chance to take a good look at this. Without replay, how do you really tell? I’ll have to defer to the OS videos.

Still not enough momentum for players but the least of my worries right now.

Why does the cpu still choose to receive in OT if they win the flip? They did this last year and it’s flat out wrong. You choose defence first in college OT.

Not impressed with this demo. I was hoping to like it but instead came away disappointed. At this point I really don’t think I will buy this on day one. I’m no longer dependent on my football gaming and there are enough good games to play for now. I might just wait until Madden comes out before I decide or just keep playing NCAA 09 and deal with its flaws. Other than the improved cpu deep ball, I just don’t see anything significant here that warrants an upgrade – certainly not a $60 one.