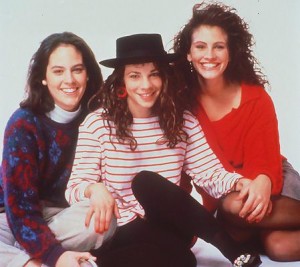 A sweet and sassy comedy about the bonds of sisterhood, Mystic Pizza offers the opportunity to see some solid young actors early in their careers. Three sisters of blue-collar Portuguese descent work in a pizzeria in the coastal town of Mystic, Connecticut. Each has her own unique romantic entanglements. One is the fast girl in town (Julia Roberts), who falls for a rich kid but wonders if she’ll ever be accepted; one is the lifelong local girl (Lili Taylor) in love with her fisherman boyfriend (Vincent D’Onofrio) but scared of what marriage will do to their sex lives; and the youngest sister (Annabeth Gish) dreams of going to Yale but during a summer of baby-sitting has an affair with a married man. Through it all each sister depends on the others regardless of the complications. It’s the alluring charm of the three disparate leads that makes Mystic Pizza the delightful experience it is. 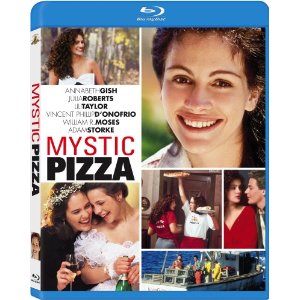 Mystic Pizza is a workplace drama that takes place on the East Coast in the town of Mystic, Connecticut. It was filmed at the actual pizza parlor that inspired Amy Jones to write the story, in the town of Mystic at 55 West Main St. After the movie came out the joint became very popular. The movie isn’t that great, but like pizza, even a bad pizza is still pretty good. Hey, it’s pizza. The town is a fishing village with a high concentration of Portuguese, which is what Daisy (Julia Roberts) and Kat Arujo (Annabeth Gish) are. They have so much lobster there that the locals actually get tired of it. That’s when they go out for pizza.

Mystic Pizza is best remembered as the film that launched Julia Roberts on the road to stardom. Her smile lights up the silver screen, and it is very apparent that the camera loves her. It was also among the first films to feature Annabeth Gish and Lili Taylor. It marks the feature film debut of Matt Dammon as well, but he has such a small part that if you blink you can miss it. His character, Steamer, has the immortal line: “Hey, mom, do you want your green stuff?” Ben Affleck auditioned for the part as well. Why am I not surprised?

Two other actors in Mystic Pizza are very familiar due to television: Conchata Ferrell plays Charlie Sheen’s housekeeper Berta on Two and a Half Men and Vincent D’Onofrio is familiar from Law & Order: Criminal Intent. In Mystic Pizza he is much younger and skinnier, and his character, Billy, a fisherman who still lives at home with his mother, wants to marry Jo Jo (Lili Taylor) but she is the one who is afraid of commitment. She faints at her wedding and can’t go through with it.

Meanwhile the Arujo sisters are quite different from each other. Katherine, or Kat as she’s called, is the serious one, who works several jobs besides the pizza gig, saving up to go to Yale and study astronomy. Daisy is a different story, a pool hustler and party animal, she falls for a rich preppy, Charles Gordon Windsor, Jr (Adam Storke). She worries that she won’t fit in with his rich family, but he has some issues of his own. He has been kicked out of law school for cheating, and that didn’t go over very well with daddy. Neither does his choice of Daisy, but will true love prevail? Stay tuned. As for Kat, one of Kat’s jobs is as a babysitter, but she falls for the father while the wife’s away in London.

Finally, Leona, the owner of the restaurant, needs a good review from the local food critic to drum up business. If he would only taste the pizza, which is made from a secret family recipe, he would taste that it was… well, Mystic. Only trouble is he is notoriously fussy and hard to please.
Movie Quality: 8/10

The print is presented in 1080p/AVC MPEG-4 with a 1:85:1 aspect ratio. While colors are strong and accurate looking they do appear rather soft throughout. Blacks are deep. There is a fine layer of grain. The print is not pristine as there are times where there is white speckles and a bit of dirt. Details and clarity is decent and really helps with this 1080p transfer for larger screen viewings. If you already own this on DVD, and are a fan of the film upgrading to the Blu-ray version would be recommended.
Print Quality: 7/10

The audio is presented in a DTS-HD MA l0ssless 2.0 mix. With a 2.0 mix, this is strictly front heavy experience which is serviceable since there is no action in this film and merely dialogue driven. In 2011, there is no real excuse to be release films with 5.1 potential mixes on Blu-ray. Another area where the audio would have done wonders is with the soundtrack which would have filled the soundfield much more. Dialogue is clean and clear as well placed through the center channel.
Print Quality: 6/10

This is a light-hearted story of three childhood friends who experience many “bumps” in the road as they come of age. The characters are endearing and interesting. This is an opportunity for Julia Roberts fans to see her at the start of her career.
Overall Rating: 7/10