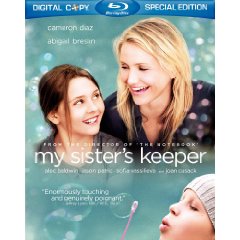 Grab a box of tissues and settle in for a heart-wrenching exploration of illness, morality, and familial bonds in this excellent screen adaptation of bestselling author Jodi Picoult’s My Sister’s Keeper. When parents Sara (Cameron Diaz) and Brian Fitzgerald (Jason Patric) find out that their daughter Kate (Sofia Vassilieva) has leukemia, they make the difficult choice to utilize the advancements of modern medicine and impregnate Sara with a child genetically ensured to be a donor match for Kate. Throughout the many years of dealing with Kate’s illness, the needs of individual family members–including Kate’s parents, her brother Jesse (Evan Ellingson), and her sister Anna (Abigail Breslin)–are largely ignored in light of Kate’s more serious needs. Still, Kate’s sister Anna rarely complains about helping Kate, even when it involves undergoing painful bone marrow aspirations. Recently, however, Anna has had a change of heart and has decided to stand up for her right to have a say in medical procedures involving herself: she’s enlisted a lawyer, Campbell Alexander (Alec Baldwin), to help her sue her parents for medical emancipation. The issue is highly emotional and the familial strife is further compounded by the fact that Kate is quickly failing and needs an immediate kidney transplant for even a chance of continued survival. The emotional struggle of dealing with serious illness while trying to meet one’s own needs permeates the film, as do the staggering moral dilemmas inherent in the advances of modern medicine. While Picoult’s readers may be disappointed that the film doesn’t delve as deeply into Anna’s and Jesse’s characters as the book does, My Sister’s Keeper is nonetheless an intensely powerful film bursting with emotion and moral quandary that leaves viewers pondering what lengths they might go to in a similar situation.

I’m usually wary of movies like this, and that’s because they’re inherently manipulative. What makes “My Sister’s Keeper” far better than the average tearjerker is that it doesn’t exactly manipulate; rather, it suggests, and it does so at a subtler, more believable level. I suppose it’s natural to question certain scenes after the fact, but when you’re right in the middle of it, you let it happen. It’s hard not to given the maturity of the story, the intensity of the performances, and the believability of the dialogue. By the end of the film, I guarantee you there will not be a dry eye in the house.

Fortunately, this is a film that earns its heavy-handedness. We’re not being forced to watch a shameless melodrama–we’re being asked to engage in an ethical dilemma and determine for ourselves what was done right and what wasn’t. ‘My Sister’s Keeper’ is powerful, intelligent, and incredibly moving, as I should have known it would be.
Movie Quality: 9/10

The print is presented in 1080p/VC-1 with a 2.40:1 aspect ratio. Colors are vivid throughout the presentation. Black levels aren’t as deep. Flesh tones are accurate and natural looking. Details are also excellent. The print is pristine from any issues.
Video Quality: 9/10

The audio is presented in Dolby TrueHD 5.1 mix. ‘My Sister’s Keeper’ is a dialogue driven film, so this is a front heavy experience. The dialogue was clear and crisp with no apparent issues. The mix is well balanced with the low usage of the surrounds. The rears do get some use with the soundtrack, but do not offer the excellent depth. I would say that this mix was sufficient enough for this type of film.
Audio Quality: 8.5/10

‘My Sister’s Keeper’ was a sad film due to the nature of the material, yet it was smart and well acted. Films like these are either written to make the viewer feel unintelligent in the way the story is fabricated or like how this film was handled in a way that doesn’t stoop down to those levels. On Blu-ray the film provides nice video and audio. I would give this film a rent before purchasing.
Overall Rating: 8/10