My Life In Ruins Blu-ray Review 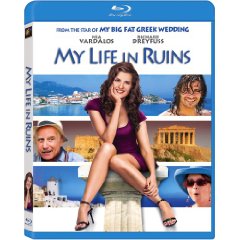 The combination of the appealing Nia Vardalos (My Big Fat Greek Wedding) and the breathtaking location shooting in Greece make My Life in Ruins the perfect film escape. The film works as a feather-light romantic comedy, with Vardalos’s character, Georgia, facing burnout in her job with a cut-rate tour company in Greece. Georgia knows there’s magic in the Greek countryside and history, yet the grind of her job has drained her. Happily for Georgia, her latest group of semi-challenging tourists will help her shed some of her hard-built personal armor, guiding her to cut loose as the tour progresses (a journey mirrored in Vardalos’s hairstyle, which starts out prim, and ends up attractively tousled). The strong supporting cast includes Richard Dreyfus–seeming very comfortable playing an old coot–Rachel Dratch, Rita Wilson, and the dreamy Greek actor Alexis Georgoulis, a bus driver with the soul of a poet. And possibly a secret crush on the oblivious Georgia. But the true star of the film is Greece itself, from the coastline to the mountains, from the Acropolis to the Parthenon. That so few American films are shot on location makes this summer treat even more appealing–as sweet as fresh baklava.

Not quite ‘My Big Fat Greek Wedding’, ‘My Life In Ruins’ is a light hearted comedy in the same vein. Georgia is a single woman who works as a tour guide in Greece. She does not like her life because she has not been with a guy in a while, all the tours are the same-with the same kinds of people- and she does not get the best accommodations in buses or hotels. That is until this tour.

There are some interesting characters who ride with Georgia on this particular trip. There is the older kleptomaniac, the dimwitted American tourist couple who want to know if Jesus played on a golf course they were at, an English Couple with a very bored teen aged daughter and a older gentleman who had promised his wife he would go before she died, as well as some Australian tourist.

At first Georgia is frustrated that the tourist are more interested in shopping and eating than looking at the historical buildings but with some help from Irv (the widower) played by Richard Dreyfuss she soon gets them interested in the history of Greece as well as finding love the with bus driver.
Movie Quality: 9/10

The print is presented in 1080p/AVC MPEG-4 with a 1.85:1 aspect ratio. Colors are stunning with this transfer, carrying a very bold and vibrant color palette throughout. Blacks are deep helping provide a very detailed image. The print is pristine from any blemishes providing a rather clean image. The scenery in Greece was so ever beautiful and having visited most of the spots that were in the film, they looked life like and breathless in high definition. I almost felt as if I was there.
Video Quality: 9/10

The audio is presented in DTS-HD MA lossless 5.1 mix. With many comedies, they never truly take advantage of the soundfield. The only time when the surrounds are in use is during the honeymoon trip in Cabo San Lucas and special effects. Dialogue is clear and crisp through the center channel.
Audio Quality: 8/10

‘My Life in Ruins’ may not be on the same level as ‘My Big Fat Greek Wedding’, Nia still finds ways to keep this one entertaining and enjoyable as a light-hearted romantic comedy. Some of the jokes work well here while others were just plain awful. On high definition this film looks very good and provides a decent audio mix for this kind of film. I would at the most recommend this as a rental. If you did enjoy ‘Greek Wedding’, then you should also enjoy this film.
Overall Rating: 9/10