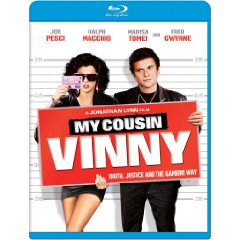 When two Italian-American boys from New York are falsely accused of murder in a small Alabama town, they call for a lawyer–but the only lawyer they know is their cousin Vinny (Joe Pesci), who made six attempts before he passed his bar exam. My Cousin Vinny is a classic fish-out-of-water comedy; the flimsy plot about clearing the two boys and solving the murder is just a hook to support a lot of culture-clash humor. Thanks to the strong cast of character actors like Fred Gwynne, Austin Pendleton, and Lane Smith, it’s pretty funny–even old-hat jokes about Brooklyn versus Southern accents come to life. Pesci has played a few too many schticky characters, but this time it works. There’s just enough humanity in his caricature to make Vinny likable and entertaining. When the movie was released, there was controversy about whether Marisa Tomei, playing Vinny’s big-haired and black-leather-wearing fiancée, deserved to win the best supporting actress Oscar (she beat out Judy Davis, Joan Plowright, Miranda Richardson, and Vanessa Redgrave); but seeing her performance on its own, it’s a comic marvel and worthy of honor.

‘My Cousin Vinny’ is an underrated gem. Fred Gwynne is terrific in his last film role. Marisa Tomei is a tough-talking, out-of-work hairdresser from Brooklyn. And of course, Joe Pesci is absolutely perfect as Vinny. Just coming out of “Goodfellas” a couple of years before, he’s a comedy revelation. Sure, he was funny in “Home Alone”, but nothing like as funny as he is here. The rest of the cast deliver very strong character performances as well. From the state’s attorney played by Lane Smith to the county sheriff played by Bruce McGill.

The movies pace is perfect,because the humour element is set near the begining,when the guys are confused about their arrest,and it continues to grow when they find that they can’t afford a good lawyer,and one of them has to ask his cousin Vinny (Joe Pesci) to act on their behalf.Although very soon they establish that Vinny’s experience as a law student,leaves a lot to be desired. This is one of the most funniest comedies, no matter how many times I have seen this film I continue to laugh as if it were the first time I saw this film.
Movie Quality: 9.5/10

The print is presented in 1080p/AVC MPEG-4 with a 1.85:1 aspect ratio. This new high definition transfer shines in some areas, while in others it tends to suffer a bit. While this is an overall better image transfer than the Special Edition DVD release, there are a few areas that I wish did receive some extra treatment. Colors are well defined, but lack any sort of pop. Blacks are deep especially during scenes with Joe Pesci’s black leather coat where you see the dark blacks show off very well. Fleshtones were a bit on the muddy side lacking any clarity. There is grain throughout the print, but very minimal and natural looking. Some of the outdoor scenes didn’t fair too well especially with the details lacking in certain areas.
Video Quality: 9/10

The audio is presented in DTS-HD MA lossless 5.1 mix. While the audio was never something to brag about with the DVD version, it is actually much better here with a high definition audio mix. This is a front heavy experience all around, but the rears did have a nice amount of  sound and effects from the score peer through. Even more interesting is how loud the audio coming from Pesci’s car when he pops the door open. Dialogue comes through the center channel very clear and crisp, but I had to raise the volume a bit than normal for the dialogue.
Audio Quality: 9/10

There are only 3 special features available for this release and that is really disappointing, considering what an underrated comedy that this film is.
Special Features: 6/10

‘My Cousin Vinny’ is a really good comedy that is underrated even to this day. Both Tomei and Pesci have some really great chemistry as they feed off each other so well. On Blu-ray, the film looks and sounds good albeit a few small flaws as a previous DVD owner you will want to upgrade. This is a highly recommended comedy.
Overall Rating: 8.5/10