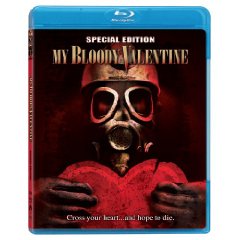 ‘My Bloody Valentine’ has to be one of the more underrated horror films of the 80’s slasher films. This film takes homage from the one that took the slasher genre to the next level, ‘Friday the 13th’. While this is nowhere near the level of say ‘Friday’ or ‘Halloween’, the story is rather interesting for a horror film and has decent amount of gore for a rather low budget film. This film has a certain appeal that can be just brushed off as yet another slasher.

The film opens with TJ (Paul Kelman) returning to his hometown after a brief stint out west. His hometown is well known for mining, even though it is a very small town indeed. TJ’s father is the Mayor of the town and he sets him up with a job in the mines since they are owned by the family. To make things worse for him is that his ex-girlfriend Sarah (Lori Hallier) is going out with his ex-best friend Axel (Neil Affleck) with Valentine’s Day right around the corner. Not only is he forced to work in the family business by his father, he has to deal with two people that he trusted so much be in love right around Valentine’s Day. The town has a special gathering every year for the day that is called, “Valentine’s Bluff”.

The annual event would become canceled with the death of five men in the mines, leaving only one to survive. Harry Warden (Peter Cowper) would be the only man to survive the accident. The thing is that he ate one of the dead victims in the mine making him a cannibal. He was placed into a mental hospital for being psychotic. Nearly twelve months later, Harry would escape the mental hospital to return to the town to kill those that want to begin celebrating “Valentine’s Bluff” again.

Fans of the original film will be very happy with this release. Due to restrictions of the MPAA back in the 80’s, this film received a lot of editing so it could be released. The blood color of red was taken out, death shots were missing, the heart-ripping, the use of the axe were taken out. Now with this new special edition, all those goodies have been placed back into the new version of the film. I haven’t seen this film in years, but from what I can remember, all these pieces being placed back into the film were a great choice. A special thanks has to go to the release of the remake that all these missing gory part of the film made their way back in.

The film doesn’t bring anything new to the genre as we have seen just about everything from the horror genre. There is something about the film that keeps it entertaining from start to finish. The acting won’t win any prizes or awards here, but it is good enough to keep the viewers attention.
Movie Quality: 7/10

The print is presented in 1080p/AVC MPEG-4 with a 1.78:1 aspect ratio. I did not go in expecting amazing results from this film on Blu-ray considering that this was filmed on a low budget. The film looks fairly good on Blu-ray for its age providing the ‘Theatrical Version’ and the new ‘Extended Cut’.  I will say that I was left surprised with yet another stellar Lionsgate catalog release. Colors are much stronger and livelier throughout the print. Colors like reds, blues, and yellow’s pop. Grain is still present, which is kept on the lighter side throughout in some scenes and others looks to be absent. Fleshtones look much more natural than ever before. Blacks are strong and really are a showcase in the mines considering there are dark scenes. Details are good, but there are scenes a plenty that could have had better focus. I also found some flickering in some scenes. If this is what we can expect from Lionsgate moving forward with older releases, then I will be a happy camper.
Video Quality: 9/10

The audio is presented in DTS-HD MA lossless 5.1 mix. While the video presentation is very well done and a surprise, the audio mix is not something to take advantage of the soundfield. The film is a front heavy experience and I do not think once throughout the entire presentation that the rears came into play. You can hear effects coming from the rears like voices at the bar, but they are so faint making you wonder why even bother to give this a high def audio mix. Then you will hear effects like the crickets chirping at night from the rears which kind of makes this feel like an unbalanced mix. While the soundfield is lacking, I found dialogue through the center channel to be clean with excellent depth. I reviewed the DVD when it released at the beginning of the year and the dialogue is a definite improvement.
Audio Quality: 6/10

‘My Bloody Valentine’ is an underrated film that is a notch below the ‘Friday the 13th’ films. I am glad that Lionsgate and Paramount went back to release a version of the film with the original gore and death scenes. A lot of that attributes to the release of the remake which hit theaters a month ago. I am surprised that this film didn’t receive sequels in the 80’s, but for fans I highly recommend viewing this new version of the film on Blu-ray.
Overall Rating: 7.5/10