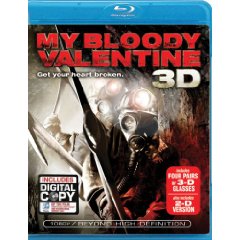 Though never a landmark in the slasher subgenre, the Canadian-made My Bloody Valentine (1981) was a favorite among gorehounds for its plentiful scenes of bloodshed; the 2009 remake sticks closely to the original in this respect, and ups the gross factor by rendering many of them in impressive 3-D. The core plot, penned by Todd Farmer and Zane Smith, remains essentially the same–a series of gruesome murders appears to be linked to a terrible mine accident from two decades ago–but just as with the original, it’s largely just a framework on which to string the carnage set pieces, which are splattery enough to please even the most jaded Saw or Hostel fanatic. The Real-D effects deliver the required degree of heart-stopping jumps without the usual eye strain, and if one can snicker away old standbys like a tree branch crashing through a windshield, one has to admire the chutzpah of presenting actress Betsey Rue’s pursuit of a wayward bed partner while fully naked and toting a shotgun in full and vibrant 3-D, moments before the pickaxe-wielding killer descends upon her. Rue’s scenery-chewing performance is the best of the twenty-something cast, which is led by Supernatural’s Jensen Ackles and Jaime King; character actors Kevin Tighe and Tom Atkins deliver their moments like the old pros they are. Though by no means a new horror classic, My Bloody Valentine 3-D sets the gross-out bar for all future slasher remakes to surpass.

So here we are with the latest in what seems the never ending run of remakes; My Bloody Valentine 3-D is of course a remake of the cult classic slasher film ‘My Bloody Valentine’ originally released in 1981. As a child I loved slasher films, but as I got older most just don’t work for me as well anymore. The original is one that sort of holds up for me, but it doesn’t work as well with me as it once did. But I still enjoy it and I was actually looking forward to the remake.

I’d say this one is on par with the original but is lacking the creepy feel of the original, but what it might lack there it does make up for in being a fun ride with some cool deaths and gore in 3-D. Overall ‘My Bloody Valentine’ while by no means a classic this film is a good remake with exceptional 3-D technology.
Movie Content: 9/10

The print is presented in 1080p/AVC MPEG-4 with a 1.85:1 aspect ratio. Colors are bright and vibrant throughout the entire presentation with reds taking center stage. Blacks provide excellent deep. Fleshtones are accurate and natural. Details are excellent providing clarity and shots that are great upclose and when the camera pans away. The film works well in 3D and is the best of its kind on home video. I was never a huge fan of 3D in the home theater, but Lionsgate has done a great job perfecting this technology.
Print Quality: 9.5/10

The audio is presented in Dolby TrueHD 5.1 mix. Just like the image quality being impressive, the audio is not too far behind. I was very impressed as to how dynamic sound effects were presented in the soundfield. There are plenty of panning effects that will catch the viewer’s attention almost immediately. While this film does have its aggressive audio for effects and soundtrack, dialogue is also excellent. Dialogue is channeled through the center with no apparent issues as the audio was clean and crisp.
Audio Quality: 9.5/10

I was pleasantly surprised ‘My Bloody Valentine’ 3-D turned out to be a great remake. We have seen countless of remakes over the last 10 years, with some being good and others being rather mediocre. The film looks excellent in high definition and this is the best 3-D to hit home video. I highly recommend this film for horror fans and even those that enjoyed the original will have a great time with the film.
Overall Rating: 8.5/10