Mutiny on the Bounty Blu-ray Review

The highlight of Mutiny on the Bounty is undoubtedly Charles Laughton’s bracingly evil performance as Captain Bligh, a man so mean that he insists on having a dead sailor flogged. Bligh pushes his men beyond physical endurance, slashes their rations for his own profit, and drastically cuts down their frolicking time with scantily clad Tahitians. Finally, the moment everyone has been waiting for arrives: first mate Fletcher Christian (Clark Gable) hits his limit and all hell breaks loose. Gable holds doggedly onto his American accent through the entire movie, but in a way it makes Christian come off as a Regular Guy in opposition to Bligh’s institutionalized cruelty. Once you get past the hurdle of his diphthongs, Gable makes an excellent Fletcher Christian–strong, fair, and noble, and he effectively conveys the struggle of a man who loathes the idea of mutiny but can’t stand see his men mistreated. And Charles Laughton is just superb. His Bligh is thoroughly appalling, yes, but it’s far from a one-note performance–when he is cast adrift on the open sea in a lifeboat and tries to make an impossible journey to land, you can’t help but root for him. Mutiny on the Bounty won the 1935 Academy Award for Best Picture and picked up a Leading Actor nomination for each of its male leads. Check it out or be tied to the mizzenmast. 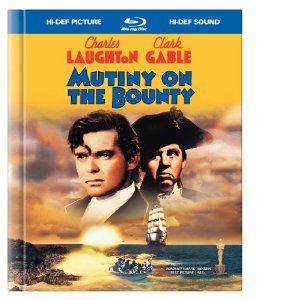 Of the three films about the famous “Bounty” ship, this version with Clark Gable and Charles Laughton I liked the best. In this version my feelings never swayed as to whom I liked (Gable and the ship mates) and whom I despised (Laughton).

Clakr Gable’s Fletcher Christian was a light hearted man who was a friend to all. His shipmates looked highly upon him, even though many had been forced to join the long voyage. He was sympathetic with the crew’s plight and often times tried his best to protect them from the many vast punishments. When Christian is fully fed up with the majorly unfair antics of Bligh and his mission, he finally decides to take command the Bounty. Christian, once he is in command, never looks back and takes his followers back to paradise on an unknown and uncharted island to live the rest of his days.

Captain Bligh is a military man to the bone who demands respect from all, and achieves it through his rough tactics, stern discipline and often times uncaring ways. He leads his ship with the Navy War Rules Book in one hand and a whip in the other. His actions can most certainly be deemed unfair, unjust and most of all harsh. Bligh feels that fear in one’s Captain is the only way to lead and earn respect. In a way he almost seems to relish finding ways to “push a man’s buttons” so he can then take out his Navy Rules War Book and give reason for punishment. His sole reason of mission first, duty second no matter the cost to ones health or life leads to the eventual infamous mutiny.

Unlike the other 2 “Bounty” films whose Capt. Bligh’s at times came across as too sympathetic; Charles Laughton’s portrayal of Capt. Bligh came off more aggressive, uncaring and unlikeable. It was easy to hate him and cheer his eventual downfall. A great performance.

The other “Bounty” films are good and definitely worth watching (especially Marlon Brando), but the best of the lot is this great black and white 1935 version with Gable and Laughton.
Movie Content: 9/10

The print is presented in 1080p/VC-1 with a 1.37:1 aspect ratio. This is one of those prints that will have fans of the film happy and those that are kind of wondering why some of the glaring issues weren’t properly cleaned up. There are artifacts and white specs that pop up throughout the print. Black & White colors have a inky look and carry excellent depth. Details are excellent all around for this 75 year old film.
Video Quality: 9/10

The audio mix is presented in DTS HD Master Mono Audio lossless track. This is not a mix that will blow you away, but the rears do provide several moments of excellent sounding effects from the score. The score is very good and fits the film well. The dialogue is clean and clear through the center channel. This is a well balanced mix.
Audio Quality: 8.5/10

This was the first and even best version of the three released versions. This film concerns about leadership issues and it may be considered as a permanent management lesson.
Overall Rating: 8/10