Much Ado About Nothing Blu-ray Review 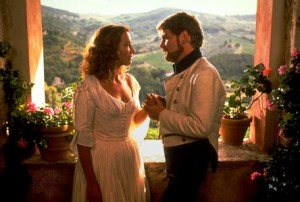 Kenneth Branagh’s 1993 production of Shakespeare’s Much Ado About Nothing is a vigorous and imaginative work, cheerful and accessible for everyone. Largely the story of Benedick (Branagh) and Beatrice (Emma Thompson)–adversaries who come to believe each is trying to woo the other–the film veers from arched wit to ironic romps, and the two leads don’t mind looking a little silly at times. But the plot is also layered with darker matters that concern the ease with which men and women fall into mutual distrust. Branagh has rounded up a mixed cast of stage vets and Hollywood stars, among the latter Denzel Washington and Michael Keaton, the latter playing a rather seedy, Beetlejuice-like version of Dogberry, king of malapropisms. The DVD release has optional full-screen and widescreen presentations, Dolby sound, optional Spanish and French soundtracks or subtitles. 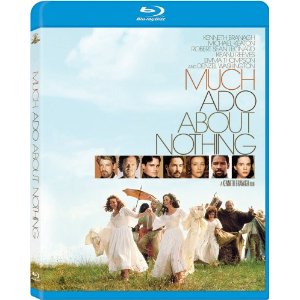 The movie is set at a sun-drenched and sumptious villa in Tuscany, where all have assembled for the pending wedding of Claudio (Robert Sean Leonard) and Hero (Kate Beckinsale). To the pass the time before the wedding, Don Pedro (Denzel Washington) sets up a romantic trap for the confirmed bachelor Benedick (Branagh) and his arch nemesis Beatrice (Thompson), who delight in their verbal tormenting of each other. Don Pedro allows the two to believe that each is intent on wooing the other. This deception is the heart of the movie, as through some delightful dialogue and hilarious scenes, Beatrice and Benedick arrive at a new appreciation of each other.

The romantic mood is almost spoiled by Don Juan (Keanu Reeves), who seeks to undermine the relationship of Claudio and Hero by suggesting that Hero has been unfaithful. Reeves looks uncomfortable with the material and his wooden performance as the villian shows it. Fortunately, the local sheriff (Michael Keaton), a bumbling, manic barrage of malapropisms, uncovers Don Juan’s plot and saves the day.
Movie Quality: 9/10

The print is presented in 1080p/AVC MPEG-4 with a 1:85:1 aspect ratio. The latest wave of MGM releases have had some subpar video quality. ‘Much Ado About Nothing’ finds it way on to Blu-ray with a decent transfer which is one of the better releases from the latest MGM releases.  I won’t say that I was overly disappointed with this print but compared to other films in this era they MGM could have done more. While colors are strong and accurate looking they do appear rather soft throughout. Blacks are deep. There is a fine layer of grain. The print is not pristine as there are times where there is white speckles and a bit of dirt. Details and clarity is decent and really helps with this 1080p transfer for larger screen viewings. If you already own this on DVD, and are a fan of the film upgrading to the Blu-ray version would be recommended.
Print Quality: 7/10

The audio is presented in a DTS-HD MA l0ssless 2.0 mix. This is rather disappointing that the audio mix is presented as a DTS-HD MA 2.0 mix. The fantastic score alone would have taken advantage of the soundfield better. With a 2.0 mix, this is strictly front heavy experience which is serviceable since there is no action in this film and merely dialogue driven. In 2011, there is no real excuse to be release films with 5.1 potential mixes on Blu-ray. Dialogue is clean and clear as well placed through the center channel.
Print Quality: 7/10

This was a delightful view into the highs and lows of courtship, love, jealousy, and hate and what havoc can be wrought by schemes devised to satisfy emotional turmoil. With the lovely backdrop of Italy, all is well that ends well for the characters. Michael Keaton as comic relief is brilliant.
Overall Rating: 6/10