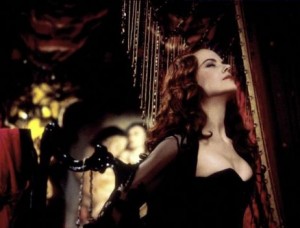 A dazzling and yet frequently maddening bid to bring the movie musical kicking and screaming into the 21st century, Baz Luhrmann’s Moulin Rouge bears no relation to the many previous films set in the famous Parisian nightclub. This may appear to be Paris in the 1890s, with can-can dancers, bohemian denizens like Toulouse-Lautrec (John Leguizamo), and ribaldry at every turn, but it’s really Luhrmann’s pop-cultural wonderland. Everyone and everything is encouraged to shatter boundaries of time and texture, colliding and careening in a fast-cutting frenzy that thinks nothing of casting Elton John’s “Your Song” 80 years before its time. Nothing is original in this kaleidoscopic, absinthe-inspired love tragedy–the words, the music, it’s all been heard before. But when filtered through Luhrmann’s love for pop songs and timeless showmanship, you’re reminded of the cinema’s power to renew itself while paying homage to its past. 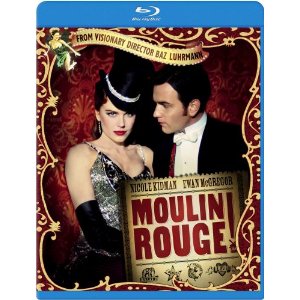 Moulin Rouge, as a film, is many things. And depending on your artistic tastes, is either a feast of visual flair and musical splendor or an awkward flick. Yes, it is a very stylized film, coming from the same director of Romeo + Juliet and Strictly Ballroom. But at the same time, it has a voice, a soul, and most of all – heart.

The tale of Moulin Rouge starts in Paris, in the height of a bohemian renaissance. It is here that a hopeful poet Christian (Ewan McGregor) meets Satine (Nicole Kidman), the star female entertainer at the Moulin Rouge. To appease a snooty Duke for a chance as a renowned actress, Satine along with Christian, pitch an idea for a romance stage play (on-the-spot and totally improvised in an amusing way, I must add). The plan works and preparations for the production are underway. In time, Christian and Satine fall in love, much to the dismay of the jealous Duke, who is determined to have Saline as his own.

The look of Baz Luhrmann’s films are very stylish and extravagant, and Moulin Rouge is no exception. The performance is quite over-the-top with the artistic flair, yet reflects the tone that the film aims for, and pulls it off rather well. And while I am admittedly not a huge fan of the musical film genre, and the some of the selection of songs featured in Moulin Rouge is borderline to what I consider tolerable, the film kicked it in the teeth for me.

Art and sounds make Moulin Rouge a grand spectacular, but where it really excels in in the performance of the players. The chemistry with McGregor and Kidman is, for a lack of a better word, is surprisingly amazing. For some time I have often neglected in watching Nicole Kidman act in films, and now I forgot as to why. What she brings unto the table in this film particular, I may not have much of a reason to turn a blind eye. Ewan McGregor is also fantastic in his role, and it’s been a bit of a shame that he is not in more high-profile projects.

For the not-so artistic, Moulin Rouge can be a awkward roller coaster ride. But for those for a eye for flamboyant visual splendor and a mind to see past the skin, Moulin Rouge is a wonderful delight.
Movie Content: 9/10

The print is presented in 1080p/AVC MPEG-4 with a 2.35:1 aspect ratio. Colors look good providing a solid color palette. Black levels are also fine, yet do not stand out. Flesh tones are accurate and natural. I did notice some print issues throughout the film, but they weren’t anything that became overly distracting. There is some subtle grain throughout helping fit in with the film’s overall feel and tone. Fans of the film will be happy with this solid remastering in high definition.
Video Quality: 9.5/10

The audio mix is presented in DTS HD 5.1 Master Audio lossless track. This mix does a great job of taking advantage of the soundfield whenever the band is on screen. Even more impressive is that even sound effects from the film fill the soundfield. In the one area where this mix shines is with the musical performances and score, it makes you feel like your sitting right in the Moulin Rouge. It’s a great feeling making this a very atmospheric mix. Dialogue is clear and crisp through the center with no issues.
Audio Quality: 9.5/10

Taking classic rock-n-roll songs and rearranging them to form a truly entertaining and innovative, Lurhmann leads the way into the dark, seductive world of the Moulin Rouge. Moulin Rouge is a movie that you really can’t “sort of like.” Either you do, or you don’t.
Overall Rating: 9.5/10