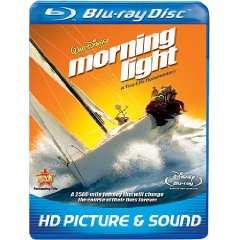 Morning Light concerns the 2006 TRANSPAC, an annual, open-ocean race between sailing sloops crossing the Pacific Ocean from California to Hawaii. The film focuses on the team manning the Morning Light, 15 young men and women who undergo intensive training over months and then are left to their own devices racing against sailors far more experienced than themselves. Morning Light is divided between a competition section that resembles a broken-hearts-and-all MTV reality show (with a total of 20 people vying for the 15 spots) and the race itself. Neither is particularly fascinating: the former just feels like an extension of television, while the racing action is dominated by technical speak and visuals that will largely appeal to viewers who have spent a lot of time on boats. The rest of us end up sitting through large patches of documentary footage that don’t provide a clear understanding of what’s going on or what any of it really means to the individuals involved. Morning Light did not have to look and move like cable sports channel fodder. The film could have more closely resembled, say, a Warren Miller winter sports documentary, which is almost guaranteed to appeal to non-sportsmen. As it is, a viewer feels like a fifth wheel (or the sailing equivalent).

The documentary shows us the men and women who go through training in Hawaii and have to learn safety (several professionals have died in Transpac Yacht Race competitions due to unforeseen weather conditions and inadequate safety preparation), due to the demands of the boat and having to continually grind and lift objects, they need to be in their best shape and to do things quickly.

The documentary starts with the training, which involves everything from physical fitness to emergency preparations and, you know, actual sailing. Unfortunately, only 11 of the sailors can actually man their boat, called Morning Light, for the actual race. After four months together, the group must select the actual team.

The photography is stunning, especially the night shots, which I’m hoping are not computer generated since they are so breathtaking (say it ain’t so, Roy). The score is good too, with contemporary music, songs and even a number by members of the crew at the end of the film.
Movie Content: 8/10

The print is presented in 1080p/AVC MPEG-4 with a 1.85:1 aspect ratio. Colors are stunning with a very rich color palette. Colors are bold and deep. The sharp colors bring out the details of the print. The print is rather clean with a few instances of a drab looking image. For the most part this is a very stunning image.
Video Quality: 8.5/10

The audio is presented in DTS-HD MA lossless 5.1 mix. While the surrounds aren’t as engaging as you would expect from an ocean adventure documentary, they are rather immersive. The times the surrounds are engaged, you do feel like a part of the experience. Dialogue is very clean through the center channel.
Audio Quality: 8/10

The film only has 2 special features presented in high definition.

‘Morning Light’ is not a documentary for everyone. This is more geared towards those that are fans and enthusiasts of sailing. While I was ho-hum on the documentary itself, the scenery was breathtaking and very captivating. On Blu-ray the film looks very good immersing the viewer. I can only recommend this to fans of this film or if you are an enthusiast of sailing.
Overall Rating: 7/10