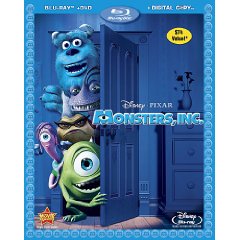 Experience the film that captured the hearts of critics and fans around the world in a breathtaking new way. MONSTERS, INC. is visually dazzling, action-packed and hilarious, raves the Boston Herald. And now, with eye-popping, crystal-clear visuals and theater-quality sound, it’s even better on Disney Blu-ray Hi-Def! Lovable Sulley (John Goodman) and his wisecracking sidekick Mike Wazowski (Billy Crystal) are the top scare team at Monsters, Inc., the scream-processing factory in Monstropolis. When a little girl named Boo wanders into their world, it’s the monsters who are scared silly, and it’s up to Sulley and Mike to keep her out of sight and get her back home. Open the door to a fantastic world of fun and imagination that will have you screaming for more. Featuring never-before-seen bonus features, the original DVD and a DisneyFile Digital Copy of the movie, MONSTERS, INC. is a sensational new experience on Disney Blu-ray.

Like the other Pixar offerings, everything about this film is beautifully constructed, including the characters, the voices, the backgrounds, the music (which won Randy Newman his first Oscar), and not least of all the story. Pixar spends a lot of time and energy developing deep, textured stories that work on many levels. Look just beneath the surface, and there might be a message lurking.

Although they’re a weird looking bunch, the monsters all have oddly ordinary names, like Mike Wazowski and James P. Sullivan (“Sully”). They live in houses, go to work each day, and worry about romantic relationships and energy shortages. Except for outward appearances, they’re a lot like us.

To deal with the energy problem, they invade the private territory of small, dark-haired people who don’t speak the language (human children), popping out of their closets, intimidating and scaring the “energy” out of them in the form of screams. The monsters are taught that children are toxic, and any contact must be avoided at all costs. Even a child’s sock brought back into the Monster world is enough to trigger a full-scale governmental SWAT team decontamination. Impatient with the low efficiency of the scare technology, Sully’s evil arch-rival, Randall, builds a machine to forcibly suck the scream-energy right from the unwilling mouths of the children. In searching for test subjects, he inadvertently lets the human child, Boo, into the Monster world.

This classic tale takes the monster in the closet premise and turns it into a face paced, quick-firing one liner fest with a deep sense of emotion. But it is the cautionary undertone that challenges us adults not encourage our kids to grow up too soon, that makes this film exceptional.
Movie Quality: 10/10

The print is presented in 1080p/AVC MPEG-4 with a 1.85:1 aspect ratio. This has to be one of the most colorful animations that I have seen on Blu-ray. Due to the colors popping off of the screen, it brings out the fine details in the animation. Some good examples of fine details, look at Sulley’s fur coat, you can see individual strands of hair.  While this is a demo worthy film considering how nice the image looks, there are some small issues with the details. There is some jaggy looking issues with the furs of the animals. I am not too sure how or why this occurred and how it got by the engineers. To some like myself it will be noticeable, while to others they might not notice it at all. Albeit this small issue, ‘Monster’s Inc.’ still looks unbelievably great in HD.
Video Quality: 10/10

The audio is presented in DTS-HD MA lossless 5.1 mix. The sound is rather impressive in ‘Monster’s Inc.’ and blew away my expectations considering that the original DTS track on the DVD was very good to begin with. It takes advantage of the soundfield with the rears actually getting a good workout with the soundtrack and effects. Sounds are peering from all the satellites in the soundfield providing a nice amount of panning effects. Dialogue is well placed through the center channel with voices being so ever clear.
Audio Quality: 9.5/10

Disney/Pixar has stacked this release with loads of special features which makes this the ultimate edition release. I really enjoyed the commentary, but has been similar as we have seen by the trio with their past releases. It was nice to see mixture of HD and SD with this release even though I would have preferred all extras in HD. The short films were entertaining a nice addition for those that love the Pixar shorts.

‘Monster’s Inc.’ is a classic Disney/Pixar title that I am excited to see release in high definition on Blu-ray. Video quality is demo worthy albeit a few small issues, and the audio is very well done considering that the DTS track on the DVD was also impressive. Then add the plethora of extras and you will be impressed all around. This is another one of those don’t walk to the store or your computer to place an order, run because if you are a fan of this film this is the ultimate edition.
Overall Rating: 9.5/10