Posted in DVD Reviews by George Theofanopoulos on 25 August 2011 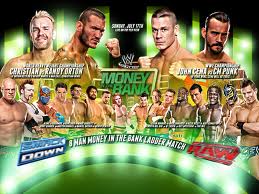 For years, the Money in the Bank match was a highlight of WrestleMania, with each of the six winners going on to successfully cash in their opportunities and win World Championships. Last year, the popular match headlined its own WWE pay-per-view event, and two spectacular matches led to two more successful title reigns, including the Miz seizing on his momentum at last year’s event to become the most must-see WWE Champion in history. So the stakes are incredibly high for the Superstars of Raw and SmackDown look to climb the ladder of success at Money in the Bank 2011. 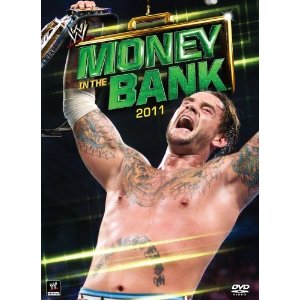 The hype of CM Punk’s contract expiring the night of Money in the Bank was the single most incredible thing in the last few years. The epic worked shoot promos, the build for the match, this PPV couldn’t and wouldn’t disappoint. This was an all around great show and you’ll hear why.

Smackdown Money in the Bank Ladder Match
Sheamus vs. Cody Rhodes vs. Wade Barrett vs. Sin Cara vs. Justin Gabriel vs. Heath Slater vs. Daniel Bryan vs. Kane
This was definitely the right choice to open the show. This showcased all of smackdown’s bright young stars (with the exception of kane) to their full potential. Lots of high-risk, high-flying spots in this one, and the highlight to look out for is Sin Cara being powerbombed through the ladder by Sheamus. The outcome was definitely unexpected, but it was a refreshing surprise. Great ladder match here.

Diva’s Championship
Kelly Kelly (c) vs. Brie Bella
This was basically your typical diva’s match. The wrestling holds and some neck-breakers here and there. It wasn’t unwatchable, but its nothing out of the ordinary.

Mark Henry vs. Big Show
For the first time in a long time, a mid-card match actually had decent buildup. The storyline here was that Big Show “woke up” Henry and made something out of him. I really enjoy Henry’s heel character and he had impressed up to this point. This match wasn’t unwatchable either, it was a typical big man match, but the heat these to were packing was nice to see. The ending was a bit stale, but overall, this match accomplished what it needed to do.

Raw Money in the Bank Ladder Match
Alberto Del Rio vs. Rey Mysterio vs. Evan Bourne vs. R-Truth vs. Jack Swagger vs. Kofi Kingston vs. The Miz vs. Alex Riley
This was the most “star studded” money in the bank ladder match out of the two, with a few “youngsters” and a few developed stars. This match had a lot of good spots, just as Smackdown’s did. Bourne pulled off a nice spot off the top of the ladder with his signature “shooting star press”. Look out for the moment where The Miz takes a hard fall on his knee and comes back out to a huge pop. In the end, the result was what I expected it to be. Another great ladder match.

World Heavyweight Championship (If Orton is DQ’ed, Christian wins the title)
Randy Orton (c) vs. Christian
This was their third straight PPV encounter for the World Championship, so I was getting a bit sick of this feud. WWE continued to try to spice it up, with the addition of the stipulation, so I can’t totally hate on this. These two put on another great back and forth match, and it really was no different from their Smackdown and “Over the Limit” bouts, but this definitely topped their one at “Capitol Punishment”. The ending made sense, considering the stipulation, and the fans of the “heel viper” Orton will love the aftermath.

WWE Championship (If Punk leaves Chicago with the title, Cena is “fired”)
John Cena (c) vs. CM Punk
This was not only one of the most anticipated main events in recent history, it was one of the most anticipated of all time. The buildup was absolutely great, consisting of Punk’s contract issues, and involving Vince & the champ, Cena. The big question was, would this live up to the hype?. It not only lived up to it, it surpassed it by a mile. These two went on for an incredible thirty minutes. The crowd was electric, the wrestling was great, and Punk walking out champion was a mark out moment for any fan. CM Punk and John Cena truly delivered a memorable match. Great wrestling, storytelling, and psychology.

If there is anything more that needs to be said, this is without a doubt the best PPV in the last few years. The crowd and the feel of it was absolutely amazing and there wasn’t a horrible match on the card. See this somehow, because this is one that is for the history books.