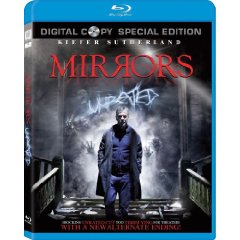 Alex Aja’s ‘Mirrors’ has finally been released on Blu-ray and DVD providing a creepy tale of tortured souls that try to take the life of the living. Alex Aja is no stranger to being involved in horror films that push some boundaries in the horror genre. Aja has written some excellent horror film screenplays over the last few years. Some of those films are, ‘High Tension’, ‘The Hills Have Eyes (Remake)’, and ‘P2’. The film was rather successful at the box office with a worldwide total gross of $73 million dollars.

The story revolves around security guard Ben Carson (Keifer Sutherland) who is a former police detective that lost his badge and family due to problems with alcohol. Ben patrols the Mayflower Department store in the evening, and he begins to notice some mysterious reflections in the mirrors. Then he starts to put together that the deaths which occurred at the department store had to do with the reflections in the mirror. The tortured souls in the mirrors are from the fire that occurred not long ago. The deeper that Ben gets involved with the investigation of his own, the worse it becomes for him and his family.

I enjoy Alex Aja’s work with the last few films released and I found ‘Mirrors’ to be yet another enjoyable film. While the film is nowhere near the work he did with ‘High Tension’ or ‘The Hills Have Eyes’, it is a bit better than ‘P2’. I also enjoyed ‘P2’, so that is nowhere near a knock as this was a film that was critically panned. ‘Mirrors’ is a remake of the Korean film, ‘Into the Mirror’. I have never seen the original Korean release, but have heard some excellent things. Kiefer Sutherland does an excellent job with this role and its great to see him return to horror films which helped launch his career back in the 80’s with ‘The Lost Boys’.
Movie Content: 4/5 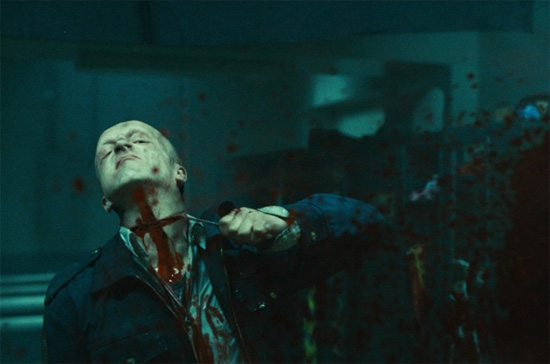 The print is presented in 1080p/AVC MPEG-4 with a 2.40:1 aspect ratio. The print actually looks stunning with a very nice looking color palette that pops. Black levels are deep throughout the film. There are a lot of black colors and dark scenes in this film. There is some subtle hints of grain in the print, but not as noticeable.
Video Quality: 4.5/5

The audio is presented in DTS-HD MA lossless 5.1 mix. The soundfield is spectacular for this film as it presents a spectacular sense of atmosphere. Sound effects such as screams, gunshots, banging, and broken glass sounds so crisp in the soundfield. The panning effects across the rears add to the atmosphere making this a creepier film. Dialogue is crystal clear and crisp through the center channel.
Audio Quality: 4/5 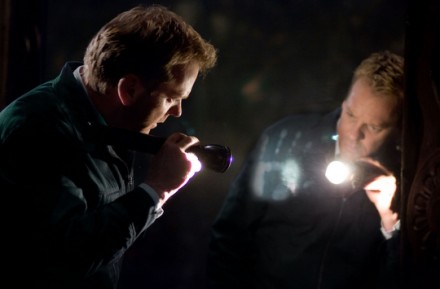 The Blu-ray also includes both the ‘Theatrical’ and ‘Unrated’ versions of the film. Alex Aja does another great job with remaking a Korean horror film that is actually interesting. The last few Korean remakes have been lackluster, but this is one of the more enjoyable ones. With spectacular video and audio, the Blu-ray version is the one to purchase.
Overall Rating: 4/5 (Purchase)